“She has a knack of knowing where to be and reading the other team’s offense to get her hands on a lot of passes,” Royals girls basketball coach Brian Satterfield said. “Olivia has also been great at creating opportunities for her teammates and herself at times. She sees the floor so well and looks to find her teammates whenever they are open. Her biggest improvement from last year is taking care of the basketball. Her decision making and places she gets to on the floor have allowed her to lower her turnover average from a year ago. She is our best defender and doesn’t always score a lot of points, but she has a hand in most of the points we score. 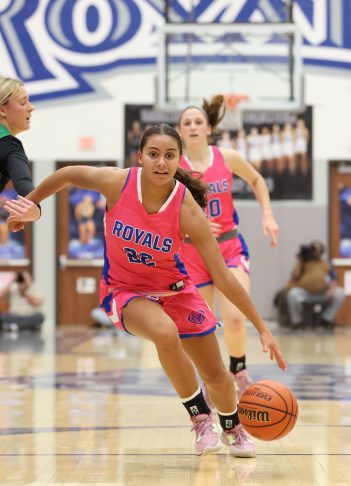 “She leads us in assists, steals, deflections and tied for the lead in blocks while second in rebounding.”

“One of my big goals is to keep turnovers down and assists up,” she said. “I try to keep a 3-to-1 assists to turnovers ratio.”

Brown said she has improved on being a leader.

“One of the things (Satterfield) challenged me is to open my mouth even more than I have before and really get across to my teammates what we need to get done,” she said.

Brown, who has played varsity all four years, is a three-year starter.

“She is one of our hardest workers every day,” he said. “The staff wishes she would be more vocal on the court at times, but she, along with our other seniors, are always reaching out and talking to players to make sure everything is good.”

Brown said the team has many scoring options. Riley Makalusky was leading the team with a 18.8 points per game scoring average, followed by her sister, Maya Makalusky, at 15.3 ppg.

“As the point guard, I see all the things that are happening on the court,” Brown said. “I think we have such a wide skill set and everyone knows how to play their roles really well. I love the team chemistry we have going.”

Brown competed on the Royals’ track and field as a middle-distance runner. Although she said track kept her in shape for basketball, she gave it up after her sophomore season to concentrate on basketball for recruiting purposes. Brown has signed with the University of Akron of the Mid-American Conference.

“The team culture was something I really thought was amazing about their program,” Brown said.

Favorite movie: “The Princess and the Frog”