You are at:Home»Current in Carmel»Carmel Community»New buildings proposed in Carmel at The Bridges, 116th Street and Range Line Road

The Carmel Plan Commission met Jan. 17 to review plans for a medical office building in The Bridges, a new building on the corner of 116th Street and Range Line Road and more.

Medical office building at The Bridges

The commission reviewed plans for a 17,000-square-foot, three-story medical office building on the southwest corner of Illinois Street and Pittman Way, just south of Market District in The Bridges. The plans fill nearly 4 acres of a 9-acre site set to be developed by Cornerstone Companies, which has not finalized plans for the rest of the site.

During a public hearing, three residents expressed concern about issues that included light pollution, traffic and maintenance of existing and proposed ponds.

Jill Meisenheimer, a west Carmel resident and a founder of Carmel Citizens for Responsible Zoning, said many neighbors of the project generally support it but are disappointed with the poor state of the existing ponds in The Bridges and worry the problem could affect future water features.

“We have concerns because the (north end) of The Bridges had terrible problems with maintenance in terms of that water,” she said. “In the beginning we were told it would have babbling brooks, but what we’ve gotten are two segments along 116th Street that have not been an inviting entry.”

Commissioners acknowledged the poor state of the existing ponds and urged city staff to identify and work with those responsible for their maintenance to improve them. Developers said their proposed ponds have a design that should prevent them from suffering the same fate as the ponds at the north end of The Bridges.

The commission sent the matter to its commercial committee on Feb. 7 for further review. The full plan commission will have final voting authority.

A commercial building proposed on the southeast corner of 116th Street and Range Line Road. (Image from documents filed with the City of Carmel)

Plans for a new building on .89 acres on the southeast corner of 116th Street and Range Line Road underwent a major redesign since being presented to the commission in December. Since then, discussions between landowner Warren Johnson and city officials revealed that the city did not secure enough right-of-way for a sidewalk along the roundabout it is constructing at the intersection, meaning Johnson’s original plans for his site wouldn’t work.

The new proposal features a one-story building (designed to appear as two stories) along 116th Street connected to a two-story office building along Range Line Road by an atrium and courtyard area.

The commission voted 5-0 to approve the plans subject to Johnson working with the Carmel’s Dept. of Community Services to resolve minor outstanding issues. Typically, the matter would have been sent to the commission’s commercial committee for further review, but with the project already delayed by the redesign and interest rates rising, Johnson urged a vote at the meeting. He said his financing for the project, which is not receiving financial support or incentives from the city, is dependent on receiving city approval by the end of the month. With a delay beyond that, he would likely not be able to continue the project, he said.

Commissioners Leo Dierckman and Adam Campagna abstained from voting. As newly appointed members of the commission, they said they felt they did not know enough about the project’s history and unique circumstances to be comfortable voting on it without the commercial committee having reviewed it. 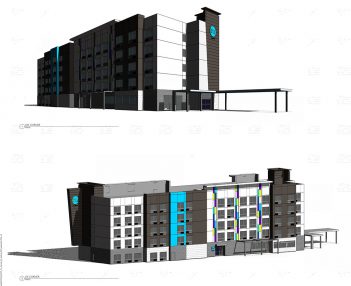 A Tru Hotel is planned along U.S. 31 north of Ritz Charles. (Image from documents filed with the City of Carmel)

Developers of a five-story Tru Hotel planned along Meridian Street just north of Ritz Charles are going back to the drawing board after commissioners said the design of the five-story, 126-room hotel isn’t the right fit in Carmel.

Dierckman took issue with the Tru brand’s colors being incorporated throughout the design, saying the building looked like a billboard for the hotel chain.

“You can’t carry that color throughout the entire building. Just spend a day here and drive around, because (that design) isn’t going to cut mustard for this commissioner,” he said. “It’s incredibly tacky, but it’s a cheap hotel. It’s going to have to be Carmelized.”

John Hafner, CEO of Minnesota-based Cities Edge Architects, thanked the commissioners for their honest feedback, as it will help guide the design team as they rework the building.

“You might think you were rough on us, but this is what we needed to hear,” he said.

The commission sent the matter to its commercial committee for further review on Feb. 7. The full plan commission will have final voting authority.

To be continued… : City council approves, repeals bonds for parks and streets projects

Home for the arts: Owners of historic Lacy Building in Noblesville to bring new life to structure