A Lawrence Police Dept. officer was shot the evening of Jan. 10 while serving a warrant, and a male suspect was killed in an ensuing exchange of gunfire with police.

The officer was treated at the scene for a gunshot wound to the leg and was released from the hospital later in the evening. The investigation is ongoing and names of those involved have not yet been released to the public, according to LPD Chief Gary Woodruff. 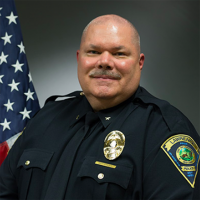 The incident began when officers arrived at a residence shortly after 8:30 p.m. in the 9400 block of Burrwood Circle to serve arrest and search warrants for two suspects charged with felonies in connection with an incident in which they opened fire into a neighbor’s home.

The male suspect, identified as Daylen Oatts, 30, by the Marion County Coroner’s Office, failed to appear in court on Jan. 3, resulting in an arrest warrant being issued. The female suspect, Sophia Heady, 26, of Indianapolis, has an arrest warrant in her name for a pretrial release violation, presumably because of the unlawful removal of an ankle monitoring device, according to Woodruff.

Oatts ran out of the back of the residence upon seeing officers arrive. He was met by officers on the perimeter of the property. Oatts returned inside the house, where he continued to fire at police. Oatts and Heady attempted to flee the scene in a vehicle while continuing the exchange gunfire with police. Oatts was killed in the exchange of gunfire between the suspect and officers that resulted in the LPD officer being shot in the leg, while Heady was incidentally shot in the leg as well.

The injured officer, whose name has not yet been released, was treated on the scene by fellow LPD officers who administered a tourniquet until gun fire ceased. The injured officer was then transported by two Indianapolis Metropolitan Police Dept. officers to Eskenazi Hospital where he received treatment and was discharged from the hospital before midnight.

“We are so grateful for the quick assistance of fellow police officers,” Woodruff said. “Especially the IMPD officers that transported our officer to the hospital. Without them, the outcome could have been different.”

Heady was transported to an area hospital where she received treatment. Once discharged, she will be taken into police custody.