A Westfield High School teacher is helping students and staff relieve their stress each week through yoga.

The school’s yoga club is designed to help individuals relax, said Natalie Messmore, who started practicing yoga about 10 years ago. Originally, a yoga instructor was hired to lead the sessions, but Messmore said she has been guiding students, faculty and staff for the last seven years.

The club meets from 3:50 to 4:50 on Tuesdays each week, typically in the school’s Large Group Instruction room. Messmore said she welcomes anyone to join.

“We focus on the breathing and the practical aspects of yoga,” Messmore said. “But really, it’s an opportunity to come in and be active and work with their bodies, their minds and breathe.”

Messmore, who teaches ceramics and sculpture at the high school, said yoga is a good way for students to take a step back from the pressures of academics and extracurricular activities, especially during final exams.

“I try to do special little sessions, especially during exam time,” she said.

For anyone who hasn’t tried yoga, Messmore encourages individuals to give it a chance. Although the Yoga Club currently only has female members, Messmore said the group is open to males and individuals of all skill levels.

“A lot of people who haven’t tried yoga download an app or watch a YouTube video, and we have a lot of fun in this group, and we fall down, and we laugh,” Messmore said. “I think that’s the big part of it and having a core group.”

Rachel Miller, a senior at WHS, has been a part of the Yoga Club since her freshman year. She said she has found participating in yoga to be beneficial since she was never an athlete, noting that it has been a main form of physical activity.

“When I started, I couldn’t touch my toes and I was out of breath running upstairs, so this has given me a lot more confidence and my ability to be athletic,” Miller said.

Miller said in general, participating in yoga has improved her physical and mental strength.

“It’s helped a lot with stress, too, and regulating breathing when I’m stressed and I can just look forward to going to yoga every week because I know that will help me calm down in light of everything that’s going on around me,” she said. “I’ve gained a lot of physical and mental confidence in myself and my body.”

Miller encourages her fellow students to participate in yoga even if they haven’t tried it before. She described the club as a judgment-free zone.

“The first step is showing up, and that’s the hardest step, but it’s the one that’s the most (important),” she said. “This is a great way to slow your life down, slow your mind down. You don’t have to think about anything, you don’t have to be judged or anything. And it’s not what you can do, it’s about what you’re working toward.”

Teachers such as Teri Vander Wyden, who has been at the high school for nearly 35 years, has been with the club for approximately 12 years.

“It helps keep me young, I think,” Vander Wyden said. “I’m at the age of when most people would want to retire, but I love teaching just as much today.”

Vander Wyden said one of the main benefits of participating in yoga is relieving stress, but also being flexible.

“Whether you’re beginning or whether you’re advanced, this club, there’s no judging,” Vander Wyden said. “You just do the best you can.” 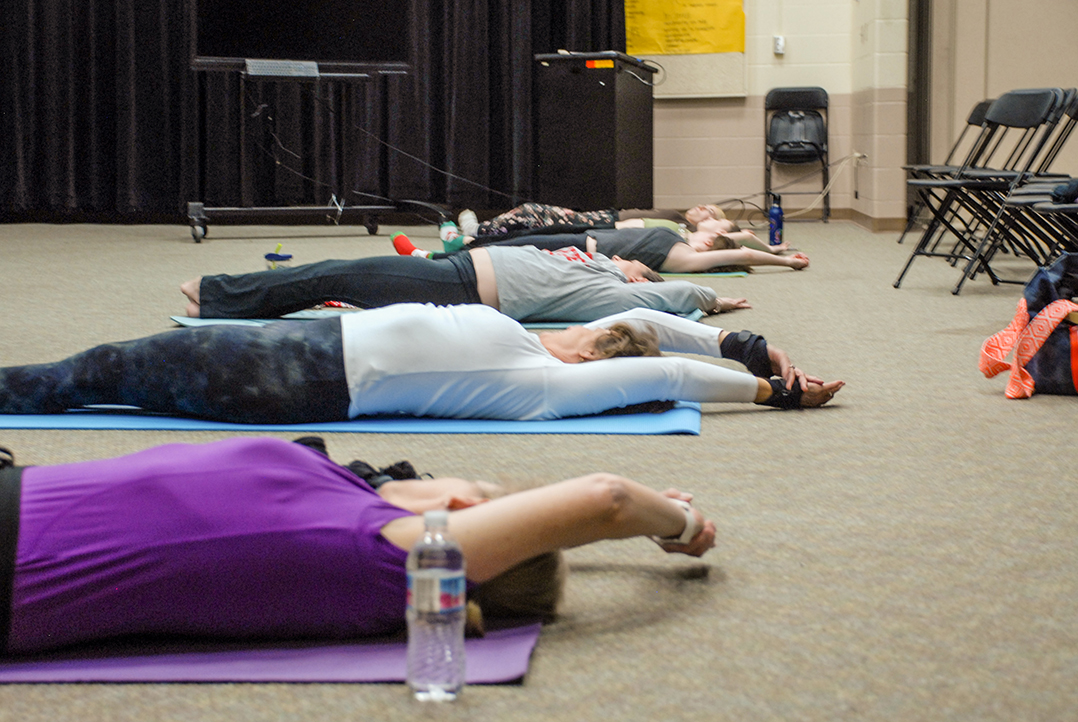