The leader of Hamilton County’s highway department has seen his fair share of winter weather over the years, but noted that preparation, manpower and communication with other entities are important factors that help clear area roadways.

Hamilton County Highway Dept. Director Brad Davis said the county begins its pre-planning process for the winter at the end of the previous winter season.

“Winter operations are taken very seriously and is nearly a year long process,” Davis said. “As soon as winter ends, preparations are being made for the next winter.”

The pre-planning process involves taking stock of the county’s inventory and working with municipalities to order salt they may need on their behalf, Davis said. In the fall, county officials also assess their current equipment to ensure that it is in working order and to make any necessary repairs, he added.

“We make sure that anything that looks like it might break gets fixed or replaced,” Davis said.

In addition, the county works closely with the Hamilton County Emergency Management Agency regarding weather conditions as well, Davis said.

County workers also review their snow routes, while a boost in manpower is also an important factor in dealing with winter weather, according to Davis. The county has two crews of 10 people, and will hire five to 10 additional drivers to supplement its workforce if needed.

The county’s salt storage barn, which had nearly 4,500 tons of treated salt last month, was used to treat almost 1,200 lane miles of roadway and bridges in the unincorporated areas of the county. The county uses a salt brine solution on the roadways ahead of a storm to prevent snow and ice from bonding to the pavement and to allow for a much easier post-storm cleanup.

“We’re always preparing for the worst and hoping for the best,” Davis said. “That includes inspecting all our equipment and repairing anything now to avoid breakdowns later.”

Randy Gasho, a truck driver with Hamilton County, said preparation is important for him in his role clearing the roads. Gasho, who has been with the county for almost 25 years, said paying attention to everything around him when driving in the winter is a key factor.

Gasho said he doesn’t let stress get to him, noting that there’s not much that can be done when faced with poor weather conditions.

Although it is unclear whether central Indiana will get hit with another round of winter weather this season, Davis encourages motorists to use common sense on the roads by being aware, slowing down and being careful while driving.

Gasho also noted that if people don’t need to be out, they shouldn’t be.

“Who needs to be out there other than us?” he said. 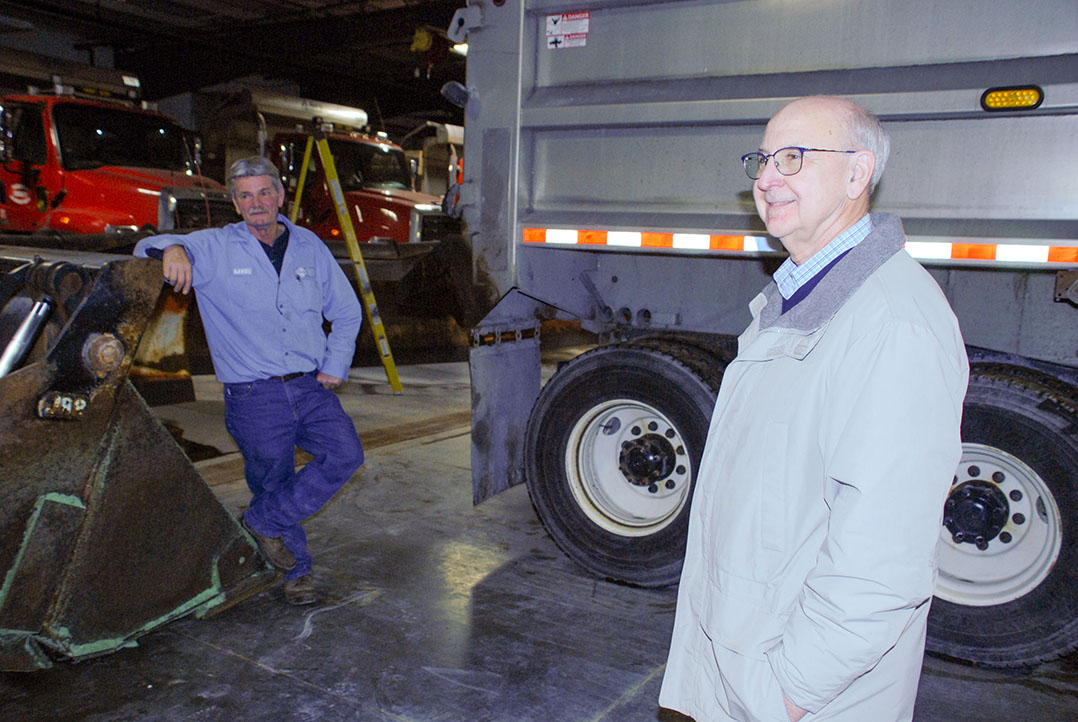 Hamilton County Highway Dept. Director Brad Davis, right, pauses inside a county garage in Noblesville. At left is Hamilton County truck driver Randy Gasho, who has been with the county for nearly 25 years. (Photos by Matthew Kent)