You are at:Home»Current in Carmel»Carmel Community»Influential stranger’s kindness in NYC leads to dream come true for Carmel student

Samir Myers and his father, Andy Myers, were enjoying a meal at a Nick’s Pizza in New York on July 31 when a stranger stopped and asked a question: “What would you do if I got you an Aaron Judge signed baseball?”

Samir, 12, initially thought it was a joke, but when the stranger revealed that he was Carl Heastie, speaker of the New York State Assembly, Samir realized he was in the right place at the right time. 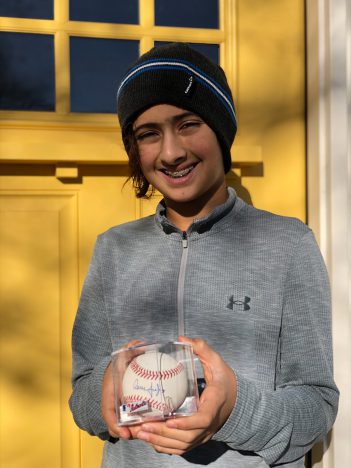 The Myers were in New York as part of a celebratory father-son trip to see the Yankees play the Royals.

“We were in New York because I graduated from fifth grade from Cherry Tree (Elementary),” Samir said. “After the game, Dad comes up to me and he’s like, ‘Do you want to see if you can get some autographs from the players?’”

Myers said he got signatures from Yankees’ play-by-play announcer John Sterling and pitcher Wandy Peralta, but not from his favorite player, Judge.

“He hit 62 home runs this season, and that’s the (American League) record,” Samir said. “I’m not that amazing of a batter. I want to strive to be like him, where I can hit that well.”

Myers and his father later went to Nick’s Pizza in the Bronx, where they encountered Heastie. Andy believes Heastie overheard them talking about Judge.

“I think he could hear the excitement, especially in Samir, and he saw the opportunity to do something cool,” Andy said.

Heastie came through, and on Nov. 7, Samir received a baseball in the mail autographed by Judge.

In an email, Heastie told Current he is glad that Samir has a positive memory of his visit to NYC that will “last a lifetime.”

“When I met the father and son duo in Nick’s pizza located right in my neighborhood and overheard their story, it just took me back to being a kid again. Samir was so excited about going to his first Yankee game, a once in a lifetime feeling and moment I believed should be commemorated,” Heastie stated. “Getting Samir the signed Aaron Judge ball not only gave joy to Samir and his family, but also put a smile on my face.”

Andy said the experience in New York serves as a reminder to show kindness to others.

“I took it as an example,” he said. “There are opportunities. I can’t necessarily get a kid a cool autograph, but If I keep my eyes and ears open, there are nice things I can do for people.”

Athlete of the Week: Guerin Catholic receiver has memorable season