Dave Koz never expected to have a 25th anniversary tour.

“This started out in a very small way, never thinking it would last this long,” Koz said. “We were just doing it in the beginning to go out and play some shows. We’ve managed to be here for a long time. We’ve seen people bring their kids and now their kids bring their kids.”

Dave Koz and Friends 25th Anniversary Christmas Tour concert is set for 8 p.m. Dec. 9 at the Palladium at the Center for the Performing Arts in Carmel. 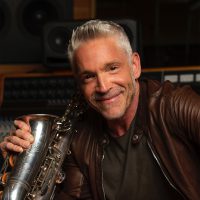 Dave Koz will bring his annual Christmas tour Dec. 9 to the Palladium. (Photo courtesy of the Center for the Performing Arts)

Saxophonist and bandleader Koz has regularly brought his high-energy Christmas show to Carmel.

The show’s opening act will be bass player Bethany Robinson and vocalist/keyboardist Sarah Scharbrough McLaughlin. Both are Noblesville residents. Robinson is the jazz band director at Noblesville High School.

Koz’s friend David Benoit, a jazz pianist, had the idea for the tour.

“We both lost a parent within a few weeks of each other,” Koz said. “I was interviewing him for a radio show I host. He just said it as an idea to go out and play some Christmas shows and deal with our emotions that way.”

Koz said there were six or seven shows the first year and it wasn’t well-attended.

“But we were invited back, and the next year Peter White came and the year after that Rick Braun came,” Koz said.

Koz said one thing that keeps the tour fresh is the lineup changes every year.

“You’re not necessarily seeing the same people every year,” Koz said. “It gives people a chance to see different combinations and different artists. The songs we get to play have so much meat on the bones, we can do so much with them. Since we are largely instrumentalists, sax, trumpet, guitar, the melodies are so great and so emotional because we have been listening to these songs for our whole lives. Because of that, they really pack a punch.”

“One of the goals was to endeavor to do material that I had never recorded before, and we succeeded,” Koz said. “The more intimate side of the holiday is what this album really celebrates.”

Koz said the concert will be a mix of songs from the album and traditional favorites.

“We do a Hanukkah medley every year,” Koz said.