Mike Zemelko has loved scented candles since he was a kid.

“I remember helping my family take all of the Christmas decorations out of the basement every year and the scents of pine, cranberry and cinnamon that would waft from the boxes as we opened them,” Zemelko said. “I’ve always had strong emotional connections to scent, and I believe everyone does, even if they don’t realize it.”

In 2014, Zemelko received a candle-making kit from his husband, Philip Siegel. The kit contained enough supplies to make three small votive candles, so Zemelko went online to learn more about candle making and where to find additional supplies. However, he kept talking himself out of turning his passion for candles into a business. At the time he received the kit, he was living in Chicago and studying for the CPA exam. 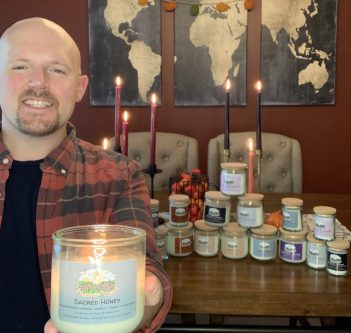 “All I did for two years during that process was work, study and sleep. I didn’t have time for any of my hobbies,” said Zemelko, 36. “Everything had to take a back seat while I was studying, including making candles on a large scale.”

Zemelko also couldn’t believe anyone would actually want to buy his candles and kept telling himself it would be a waste of time and money.

In 2019, the couple moved to Carmel, and Zemelko set up a studio in his basement and began making candles again as gifts for friends and family. He still didn’t see it as a business. But earlier this year, he had an “ah-ha” moment while scrolling through Instagram.

“I see so many people selling candles online, I thought, ‘Why not me?’ Also, everywhere you go there are scented candles, and I realized that so many people love scented candles as much as I do and prefer buying from small businesses,” he said. “At that point, in early 2022 we were expecting our first baby via surrogacy, so I knew it was now or never. If I was going to launch my own candle business, I had to do so before the baby came. Giving myself a deadline helped enormously.”

Picking a name was one of the hardest parts of starting his company. Zemelko wanted something that had meaning but was also memorable and fun to say.

“I’ve loved living in Carmel where there are so many roundabouts, to the point where I’m honestly not even sure I remember how to navigate a four-way stop anymore,” he said. “I had the idea to call my business Roundabout Candles on a run one morning, and it just sounded right to me, and it sounded like the perfect ode to my adopted hometown.”

Roundabout Candles use all-natural soy wax and fragrance oils free of phthalates and carcinogens. Prices range from $13 for a 3.5-ounce mini jar to a 9 ounce jar for $24.

Zemelko plans to release four scents for the holidays.

“For me, candles are all about making my life a little better, a little happier,” he said. “I try to use that as my guiding principle when coming up with fragrance ideas and descriptions, because I hope my candles can make even just a little improvement in someone’s life.”

For more about Roundabout Candles or to place an order, visit roundaboutcandles.com.

Making a move: Westfield Lions Club relocates to new building that will serve as its clubhouse