You are at:Home»Current in Geist»Geist Cover Stories»A new chapter: Fort Ben Library construction on schedule for completion in 2023

Construction on the newest branch of the Indianapolis Public Library system is well underway and is expected to be finished early next summer.

The Fort Ben Branch will occupy 2.4 acres at 9330 E. 56th Street in Lawrence. The new branch will service the gap between the Lawrence Branch on the northeast side and the Warren Branch on the far east side, according to Joe Backe, director of communications for Indianapolis Public Library.

“With the development of the area around Fort Ben over the last several years, the interest in a library to anchor the area has grown,” Backe said. “This project has been in the works for nearly a decade, and we are excited to see that it is finally coming to fruition.”

Not surprisingly, the community and staff members look forward to the opening of the new branch.

“If the crowd that came out to the groundbreaking is any indication, this community is eager to see this project come to fruition,” said Shelby Peak, who will serve as the Fort Ben Branch manager. “I am excited to serve this historic community.”

The new branch was envisioned as part of a redevelopment plan since the land was decommissioned and transitioned from the U.S. military to the City of Indianapolis in the 1990s, according to the IndyPL website. Originally slated to open in 2021, the project was delayed because of rising construction costs associated with the COVID-19 pandemic, including increased labor costs and inflation of construction materials prices.

The project is funded by bonds approved by the Indianapolis City-Council Council that will be assessed without any increase in IndyPL’s debt service tax rate. Backe said that recent construction additions to the $14.3 million project include exterior framing and sheathing, brick installation, parking lot paving, roofing and interior framing.

The purpose of the Fort Ben branch is to meet the needs of each neighborhood within the Lawrence and Geist area, said Mike Coghlan, capital projects manager with IndyPL. The library’s location is strategic with it being in a high-traffic area with access to public transportation, making it more accessible to the community.

“Before breaking ground on this branch, the architects led three virtual community input meetings to learn what services, amenities and priorities meant the most to patrons in the surrounding community. We’ve incorporated that feedback. It will be a beautiful, public space,” Coghlan said.

Amenities in the new 22,000-square-foot library include interactive areas designed specifically for children, teens and adults; public-use computers and other technologies; group study and collaboration rooms; tutoring spaces; and a community meeting room with a capacity of 100 patrons. There will also be walk-up, bike-up and drive-up material return locations to make the building’s services more easily accessible.

In addition, to promote built-in energy and resource conservation, the building will feature a roof-top solar photovoltaic system that will provide 80 percent of the new library’s electricity needs.

As construction moves forward, plans to furnish the interior of the new library become the focus in completing the project.

“We will spend the next few months moving in shelving, furniture and the new (book) collection,” Coghlan said.

Construction is expected to be complete by June 1, 2023. 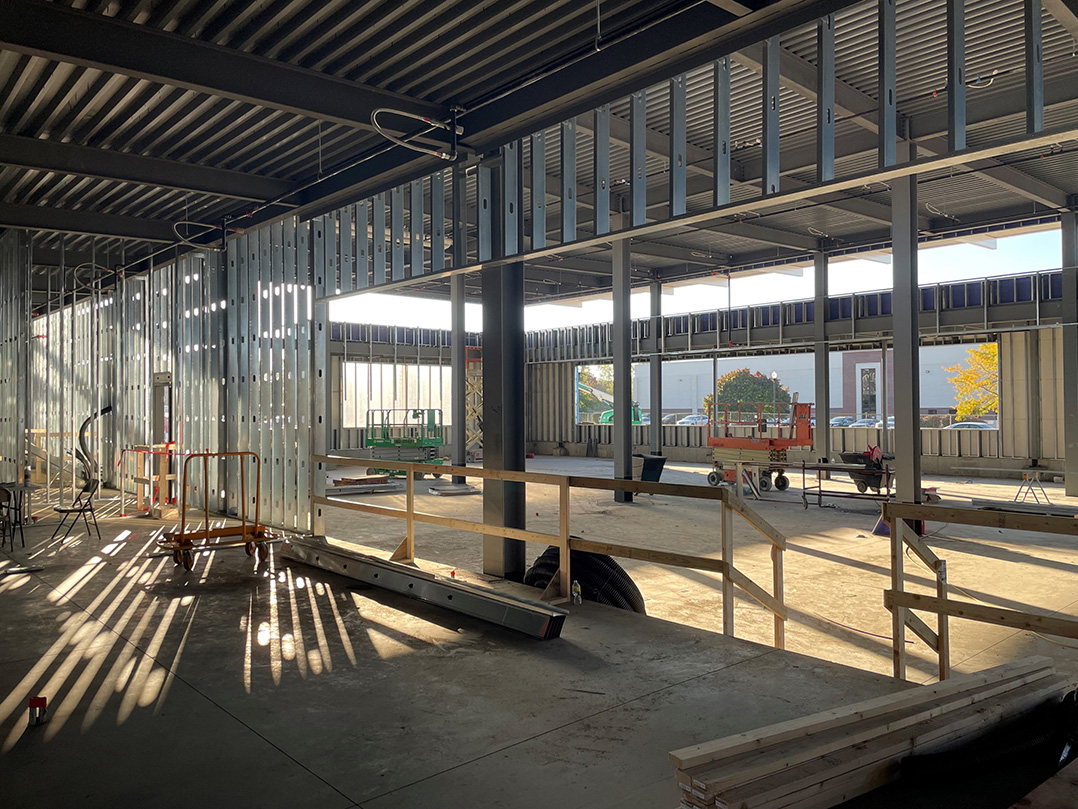 According to the Indianapolis Public Library, the Lawrence branch opened in 1967 on North Franklin Road in a storefront previously occupied by the Lawrence Post Office. It was the first branch to open within an incorporated town in Marion County. Rapid population growth demonstrated the need for a larger, permanent facility to serve the northeast side. A 3.44-acre site was purchased from MSD Lawrence Township for a new 13,500-square-foot library that opened in 1983.

Renovated in 2020, the Lawrence Branch re-opened to changes that maximized access to the Library’s services and collections, created engaging and functional spaces for those of all ages, and increased access to new technology. The project also provided group study and tutoring areas, improved lighting, more outlets for charging stations, and updates to the entrance, public restrooms and interior finishes.

The $1.5 million Lawrence Branch project and other capital projects identified in the Library’s Strategic Plan were funded from individual bonds approved by the Indianapolis City-Council Council totaling over $58 million assessed with no increase in the Library’s debt service tax rate.