You are at:Home»Current in Fishers»Fishers Cover Stories»Spooky past: Fishers a source of many haunting stories

Fishers prides itself on being a vibrant, growing city. But once upon a not-too-distant time, the former tiny town along a railroad corridor had a bit of a dark reputation. From bombings to grave robbings to deadly bar room brawls, Fishers’ haunting past isn’t as cheery as its sunny present.

But aside from those well-documented events, buried under some of the dark moments in Fishers’ history lie some urban legends that may or may not contain traces of fact.

“A lot of places have their own urban legends, and whether they’re true or not, they’re in a way stories being told from the past,” Fishers historian Robert Bowling said. “These are stories that started at some point in history, and through families and just through story time, they got passed down and to this day we’re still talking about them.”

So, as Halloween approaches, here is a look at some of Fishers spookiest local legends. 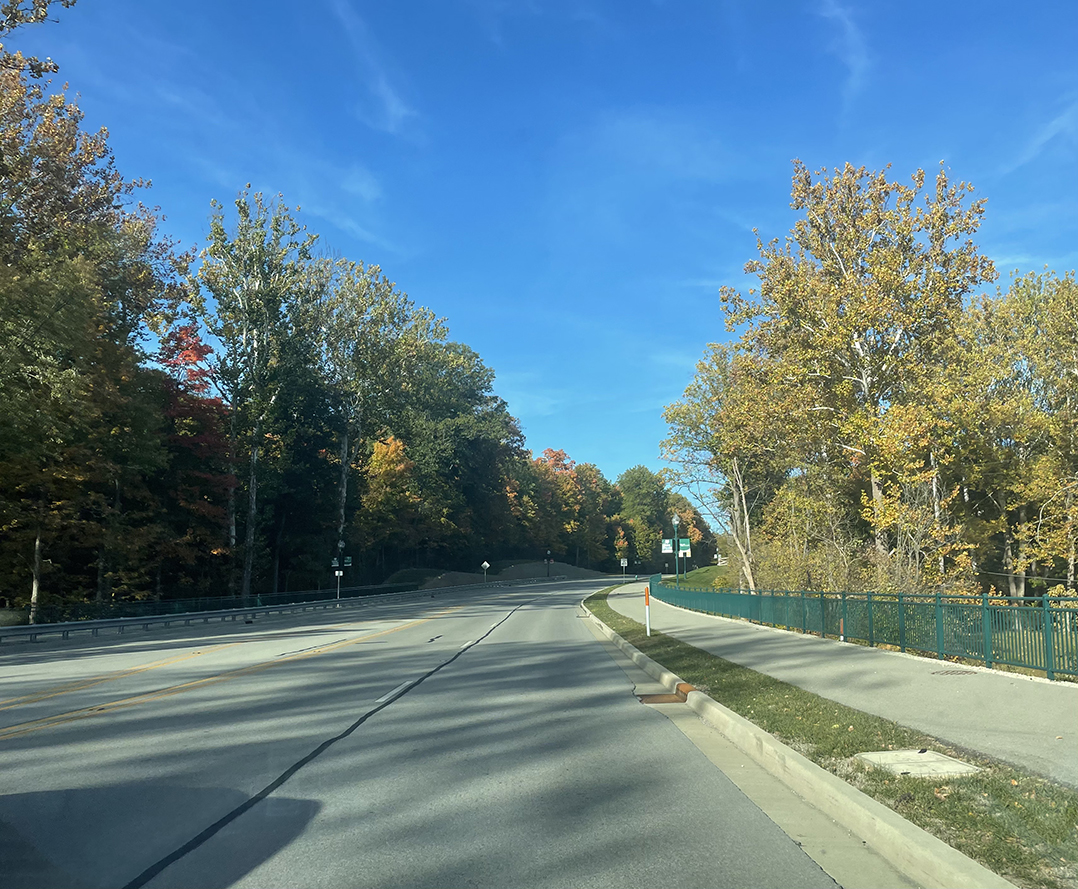 Heady Hollow is a dip in the road between 126th Street and 131st Street where people have claimed to hear shrieking. (Photo by Taylor Dixon)

Many legends have sprung from the dip in a gravel road that is known as Heady Hollow, where the cemetery sits on Allisonville Road between 126th and 131st streets.

A legend that Bowling and Hamilton County historian David Heighway haven’t been able to confirm that Delaware Township School No. 2 ever existed. The legend, however, goes that one school day a fire broke out, allegedly killing many of the children inside and destroying the building. Some claim to have seen “lights” or what they think are apparitions of ghostly children and hear screams. Those screams, Heighway said, are likely the noise of bobcats roaming the area.

“Unfortunately (the story of the school fire), is not true,” Heighway said. “The stories of the ‘screaming’ that you hear from down there is interesting from a natural history standpoint because that suggested those were more than likely bobcats.”

Bowling said the noises and shrieks some claim to hear might be spirits but not those of children. The more likely historically accurate rendering of events was that there were many local travelers that used Allisonville Road to travel through that part of Hamilton county on their way to visit or trade with William Connor. Since a lot of people traveled that road, it saw a high amount of highway thieves. The supposed hauntings come from travelers who lost their life on that road by getting killed by thieves.

Another possible reason people might hear screams, Bowling said, was that in the 1900s that dip in the road was a common place for car crashes. Even before there were cars, people reported horses randomly getting spooked for no reason in that area causing runaway horse carriages, according to Bowling.

The haunting of James Payne

In Eller Cemetery off of Allisonville Road near 106th street, Civil War soldier James Payne is rumored to keep watch over the land. Payne’s headstone is tucked away in the back corner of the cemetery, and Bowling said some think the placement was intentional.

Legend has it that Payne was a “deserter” or someone who turned his back on his troops during the Civil War and was buried in the corner of the cemetery to be shamed as a disgraced soldier. As his penance, Payne supposedly is doomed to roam the cemetery as a caretaker in the afterlife.

The story, Bowling said, is not true.

Bowling said Payne was not a deserter and likely just got lost from his troops. Military records show that Payne received his military pension, and that the desertion charge was corrected. Payne also served as a commander of the Fishers chapter of the Grand Army of the Republic, which was a veteran organization for Civil War soldiers. Bowling said Payne was also buried with a military headstone, which would not have happened if he was a deserter.

“When I started doing my research, what I found out was that James Payne was not a deserter,” Bowling said. “I’m not saying that he’s not haunting the cemetery. He’s haunting it because he’s a military soldier and he’s always protected people throughout his life. So even in the afterlife, he’s still doing the same thing, keeping watch over the cemetery.” 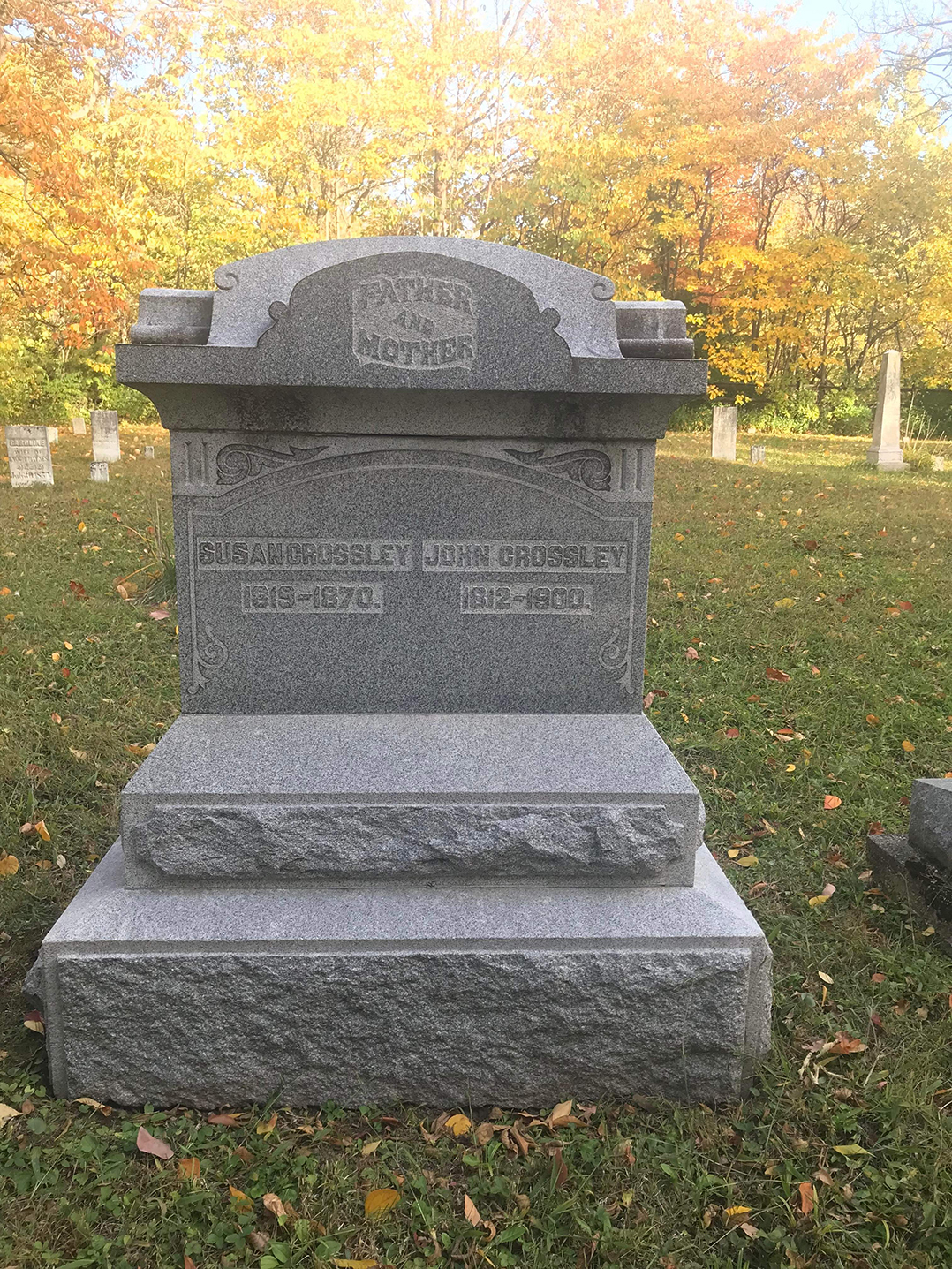 The double grave of Susan and John Crossley where people have claimed to hear John responding to their calls. (Photo provided by Sue Payne)

On a double grave at midnight

Sue Payne, a lifelong Fishers resident, grew up in a neighborhood that bordered Spannuth Cemetery near 141st Street and Allisonville. A story she heard at age 9 has stuck with her ever since. She also insists it’s true.

According to legend, if a person stands on the double grave of John and Susan Crosley at midnight during a full moon and faces the headstone, John will call out to you. The ritual mimics Susan, who died in 1870, calling out to her husband, who died 30 years later in 1900.

To summon John, according to legend, one must say, “John, John what are you doing John?” If the night is still and no other noise can be heard, he will respond, “Nothing, nothing at all.”

Payne said she has done this and heard a response.

Living among the dead

Sue Payne has lived near the cemetery her entire life. She grew up in a neighborhood that bordered Spannuth Cemetery and later moved with her husband to a house that borders the graves.

Payne said she has become used to living in close proximity to a place many people would rather avoid.

“It’s a neat old cemetery,” Payne said. “I grew up in the back of the neighborhood (near the cemetery), so that was an interesting place to poke around as a kid.”

Although she has never seen a ghost, goblin or zombie, Payne has experienced some unique incidents.

After moving in with her husband on Halloween weekend in 1977, the Paynes noticed a strange recurrence; Cars broke down, crashed or hit deer outside their home at an alarming rate. She also said during an ice storm about 15 years ago, a patch of road outside their home near the cemetery was the slickest part, and police closed the road because cars were getting backed up and sliding on black ice.

Another strange occurrence happened when Payne looked out her window one morning and noticed a new unmarked grave. She said she still doesn’t know how or when it got there.