Dan Stevens, who has been director of administration for the past 14 years, started his career with Hamilton County in January 1974 as a jailer and dispatcher in the Old Jail across the street from where the Hamilton County Government and Judicial Center now stands. Two years later, he was promoted to a sheriff’s deputy and served as a chief deputy for eight years.

Stevens also ran for sheriff and was first elected in 1986, serving two terms in office before accepting a job as the jail commander for 13 years. Hamilton County Commissioner Steve Dillinger selected Stevens to fill the role as director of administration in 2009 following Stevens’ retirement from the sheriff’s office.

“Fate has been kind to me,” Stevens said. “I have been lucky to be at the right place at the right time during my career. You couldn’t find a better place to work in the country than Hamilton County and I’ve been blessed to make a career of it.”

Dillinger, who was first elected as a Hamilton County Commissioner in 1989, spoke positively about Stevens and his contributions to the county.

“There was no one better for the job than Dan,” Dillinger said. “His working knowledge of the county and its leaders was a great asset to the commissioners. His value to this administration has been nothing less than irreplaceable.”

In his role, Stevens has been instrumental in helping Hamilton County Commissioners, elected officials and employees provide governmental services and support functions while administering large scale capital projects such as the expansion of the Hamilton County Jail, construction of the new Hamilton County employee parking garage and the site master plan of the corrections complex.

“I certainly didn’t plan to make a career out of public service when I started as a dispatcher,” Stevens said. “I just needed a job. But having a front seat to the growth of Hamilton County and helping wherever I could to improve residents’ quality of life and protecting everything we value has been a bonus.”

And Stevens’ service to Hamilton County hasn’t gone unnoticed. The Westfield native was named as Outstanding Supportive County Administrator of the Year in 2020 by the Indiana Association of County Commissioners.

The Hamilton County Commissioners have launched a nationwide search for Stevens’ successor and hope to have someone hired by Jan. 1.

Stevens, who has two children, plans to finish traveling to all 50 states once he retires with his wife Peggy. The couple also plans to spend time with their five grandchildren, he added.

“There are only so many grains of sand in an hourglass,” Stevens said. “And we still have a laundry list of things we’d like to do. While I’ll certainly miss all the good people I’ve worked with, the time has come to bid farewell.” 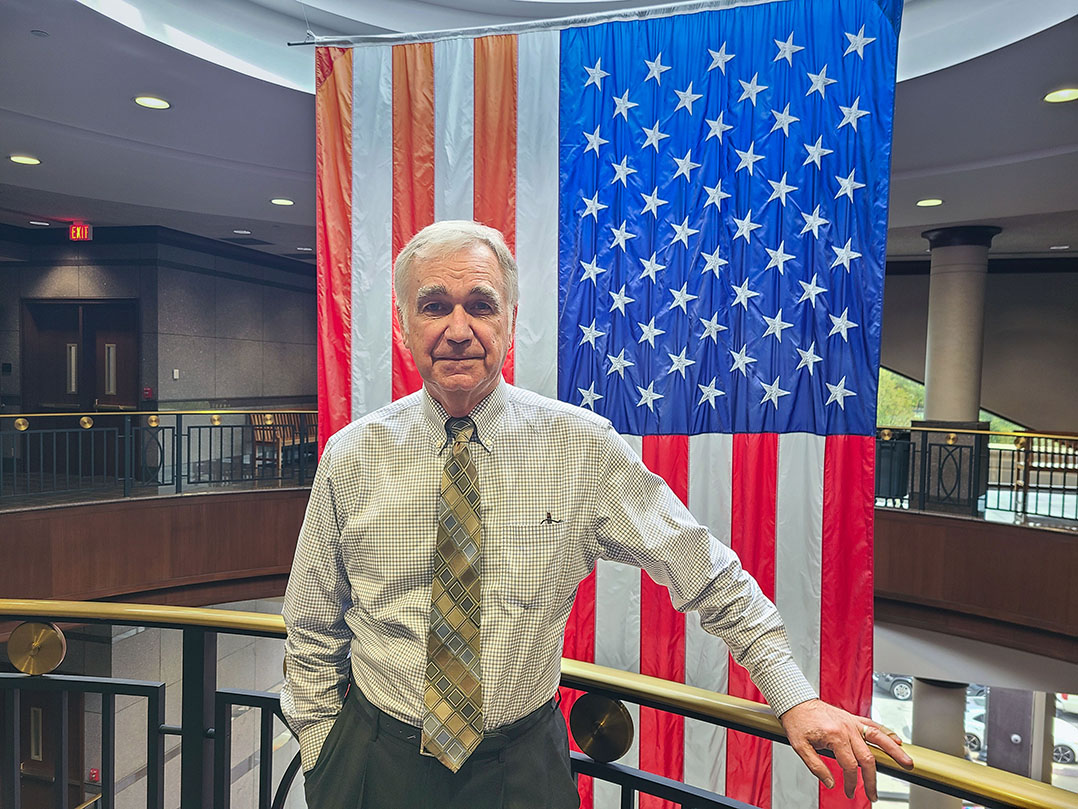 Dan Stevens pauses on the third-floor inside the Hamilton County Government and Judicial Center. (Photo by Matthew Kent)

Hometown: A Westfield native who now lives in Noblesville