Westfield Washington Schools is seeking a renewal of its operating referendum in the Nov. 8 general election that would result in a 15 percent decrease in the tax rate next year if approved by voters.

The district’s operating referendum was originally started in 2010 and was renewed in 2016 that resulted in a 13 percent decrease from $0.23 to $0.20, said Brian Tomamichel, WWS assistant superintendent for business and operations. However, the district is seeking to renew its referendum a year early and thought it would be good to place the issue before voters since they will be voting for school board candidates as well, Tomamichel said.

“It seems to make sense from our standpoint of timing, and also we’re in a place where we can drop that referendum rate from $0.20 to $0.17, so it would be a 15% reduction this year as well,” Tomamichel said.

If the renewal of the operating referendum is approved, it would take effect in 2023 and continue for another eight years. Homeowners would not see the change reflected until they receive their May tax bill, said WWS Supt. Paul Kaiser.

For a homeowner who has a home valued at $338,600, they would see a tax reduction of $4.70 per month if the operating referendum is renewed at a lower tax rate, according to the district.

The district will receive about $8 million from its current referendum this year, and Tomamichel said when the decision to pursue a decrease in the tax rate was made, the district had projected losing $500,000 annually. However, since assessed values have continued to go up, Westfield Washington Schools expects to collect the same amount annually if the renewal of the operating referendum is approved by voters next month, he added.

Approximately 55 percent of the funding from the current referendum goes toward teacher benefits, while the remaining 45 percent goes toward utilities throughout the district, according to Tomamichel. If voters approve renewing the operating referendum, the district plans to maintain low class sizes and continue retaining and attracting teachers.

Kaiser said retaining teachers is important and pointed out that the district started the school year with every teaching position filled. That wasn’t the case at some school districts across the state, he said.

The district’s base salary for a teacher at Westfield Washington Schools is $45,000, Tomamichel said.

“We’ve increased our teacher base salary enough that people aren’t leaving us because of lower salaries,” Kaiser said.

Other than maintaining low class sizes and continuing to retain teachers, the district also wants to start an orchestra and agriculture science program with referendum funding.

Westfield Washington Schools would like to hire an orchestra teacher in January to help build the orchestra program, which would be offered to students in grades 6 to 12. In addition, officials would like to start a welding program for high school students, Kaiser said.

The district also wants to start a landscape management program and expand its culinary arts program at Westfield High School, according to Kaiser, who said those programs are contingent on the renewal of the operating referendum by voters.

However, Kaiser warned that if the referendum is rejected, the district will have to make staffing cuts starting in the 2023-24 school year that would affect individuals such as teaching assistants, teachers, school administrators, maintenance staff and other positions.

“There’d be no area in our district that would not be affected,” he said.

Those cuts would also be noticeable inside classrooms as well since class sizes would go up as a result, according to Kaiser.

Tomamichel said making people aware of the renewal of the operating referendum and why it is needed is important as voters prepare to head to the polls during the Nov. 8 general election. He added that the district wants to make sure it gets out and tells the story while having community conversations with one another. 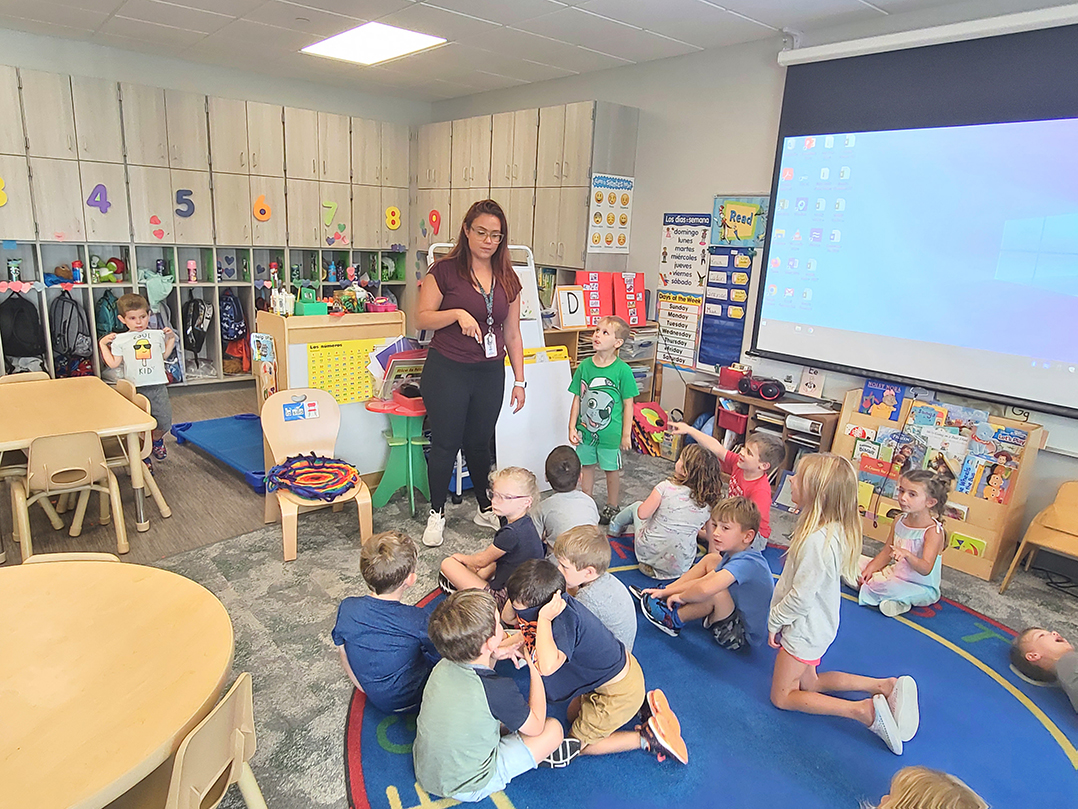 Bessy Martinez, a teacher in the All Aboard preschool program at the Virginia F. Wood Early Learning Center in Noblesville, guides students in her classroom during a lesson. (Photo by Matthew Kent)

For more information on the renewal of the operating referendum at Westfield Washington Schools, visit wws.k12.in.us/ and click on “November 8 – Operating Referendum Renewal.” Individuals can also reach Superintendent Paul Kaiser via cell phone by calling 317-385-4912 for questions.