Union Brewing Company owner Nathan Doyle is sad to leave the Monon Square Shopping Center, but he is taking a piece of the bar with him to the new location. 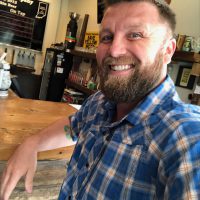 Now, it will be featured in the new location at 202 Gradle Dr., which Doyle said he hopes will open in early November.

“It’s important to me that the new spot has a lot of very familiar things, so that was something I thought we could take with us no matter where we end up,” Doyle said. “We’ve got some regulars that have been with us for 10 years, and one of them is in the band called Pork and Beans Brass Band. It seemed fitting to have a brass band do a New Orleans procession. Some people said there is no way you are going to be able to do it, but I knew our regulars could take it a half-mile down to the new spot.”

Doyle said the timing is unfortunate because September is typically the best month for the brewery. The Monon Square shopping center will soon be demolished to make way for a mixed-use development.

The new building is across from the Monon Trail, near the Carmel Fire Dept. and Carmel Police Dept.

“Being on the trail was crucial for us,” Doyle said.

Doyle, whose business opened Monon Square Shopping Center 10 years ago, said he was informed about the availability of the new space by Carmel Redevelopment Director Henry Mestetsky.

“The outside space is a little smaller and the inside space is quite a bit bigger,” Doyle said. “We are hoping to get more of a balance over the 12 months. Right now, we do about a third of our normal business in the winter, and we would like to increase that.”

Doyle said the lease is for two years and possibly up to four years.

“It’s definitely sad, we had a lot of memories that were created in that space,” Doyle said. “We have 10 employees, and we’re going to try to keep every one of them.”