You are at:Home»Current in Noblesville»Noblesville Cover Stories»‘Service before self’: Indiana State Police superintendent reflects on career, future

Indiana State Police Supt. Doug Carter, a Cicero resident, grew up with a state trooper for a father.

His father was the kind of person who neighbors in their city of LaPorte looked to when they needed help, Carter said. He said both of his parents taught him the value of service before self.

Carter’s father also taught him to fight cynicism — an occupational hazard — for as long as he could.

“Even before he retired, he was very cynical,” Carter said of his father. “And throughout the course of my career, he always encouraged me not to become cynical like him.”

Carter said he has no regrets about his 40-year career in law enforcement, which includes stints as a state trooper, serving as Hamilton County Sheriff and, finally, ISP superintendent. But he said tragedies that come in his line of work weigh on him.

“When there’s things that happen you can’t control, when you see death and destruction, over time it takes its toll,” Carter said. “I’m not counting days to the end, but I want there to be life after, too.”

If all goes according to plan, he will be the longest-serving superintendent in the history of the ISP.

“It’s not about titles and career and that stuff,” Carter said. “It’s about service before self.”

Carter oversees 92 counties and 2,300 employees as superintendent. He said he strives to bring a human touch to law enforcement.

He said he attempts to humanize the police in the way they present themselves. When he sends troopers to the Indiana State Fair, for example, Carter said he does not allow them to wear reflective sunglasses because they instantly create a barrier between officers and civilians.

“It’s simple, it’s kind of silly even, but I don’t like that steel façade,” Carter said. “I’d much rather have a human.”

Carter said he recognizes the need for law enforcement to build back trust with civilians because of social unrest, going back to the 1992 Los Angeles race riots.

To improve the relationship between the public and the police, Carter said officers must avoid isolating themselves from their communities and rely less on militarized tactics.

“We have a real opportunity to change the perception of this profession,” Carter said. “But we’ve got to look inward to do it first and not just expect people to come along with us.”

Carter said a “profound moment” was the outrage sparked by the shooting of Michael Brown in Ferguson, Mo., in 2014.

“We have to recognize that we’re not without sin,” Carter said.

Carter’s wife of 30 years, Carol Carter, said her husband is a peacemaker at heart. She said his ability to bring people together is why he is fit to be superintendent.

“I think God’s put him there for a reason,” she said. “He’s always been where he needed to be at the time he’s needed to be there.”

Carol said her husband is satisfied with many of his career accomplishments. He has affected change on a grand scale, making officers and civilians safer, she said.

But when the time comes to step down, Carol said her husband will be ready.

“He made a comment not that long ago,” she said. “He’s getting tired of being sad.” 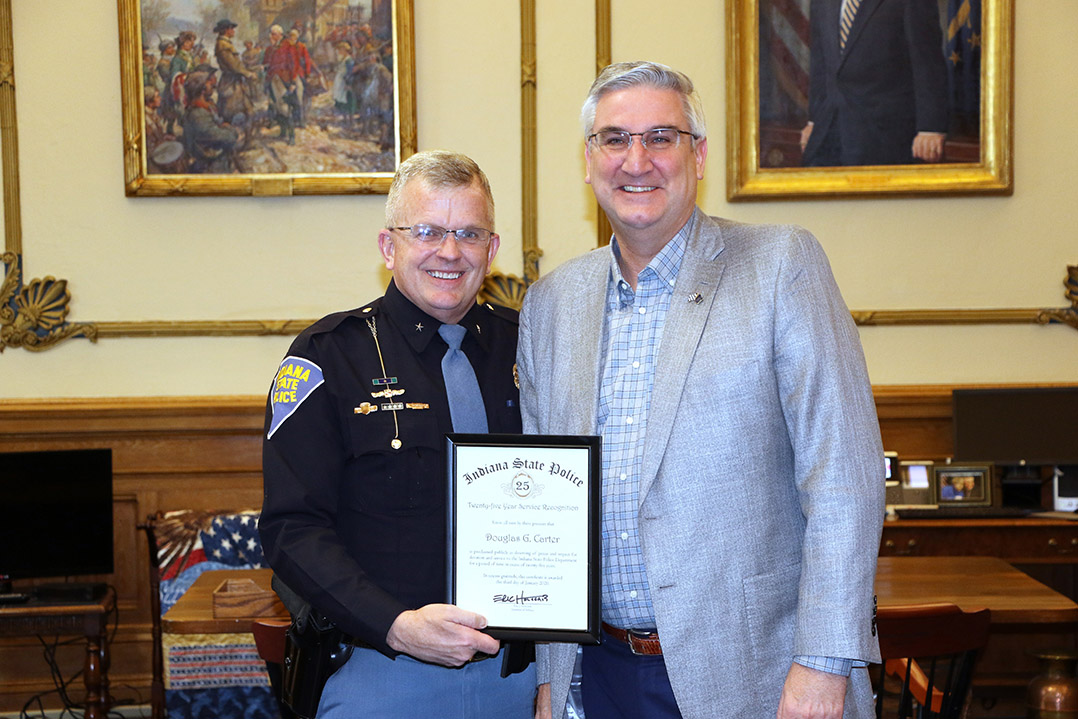 During his 40-year law enforcement career, Indiana State Police Supt. Doug Carter said several episodes haunt him. One is the Delphi murders, when two adolescent girls were found slain in Delphi in February 2017.

“I want to be able to ask the person who killed Abby and Libby in the Delphi murders, why?” Carter said.

Carter said he fights cynicism with the help of his family. He also finds solace in carpentry, a craft his dad taught him in high school.

Despite the toll the job takes, Carter said he is the luckiest man in the world.

“The memories both good and bad will live with me always,” Carter said. “That’s OK.”