On June 23, Jake LaRavia heard his name called out at the 2022 NBA Draft in Brooklyn. LaRavia was selected in the first round (19th overall) by the Minnesota Timberwolves, then subsequently traded to the Memphis Grizzlies.

LaRavia, who played two years at Indiana State University and one at Wake Forest, moved from California to Indiana at age 6. The Hoosier State has produced many standouts, and LaRavia is the latest in a line from Lawrence Central High School. 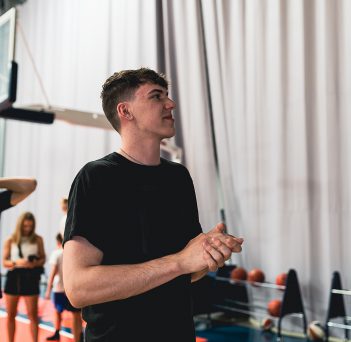 Besides LaRavia, the list includes Nijel Pack, who starred at Kansas State before transferring to the University of Miami in April, and Dre Davis, a guard at Louisville who averaged 21.5 points per game for the Bears as a senior. The list also includes guard Kyle Guy, who plays in the NBA G League. Guy played for Lawrence Central before winning a national title at Virginia in 2019.

Like LaRavia, Guy has also heard his name announced at the NBA Draft. He went in the second round in 2019.

“There’s so many great players in this area,” he said.

The Metropolitan Interscholastic Conference is no stranger to pro talent. Lawrence North High School – Lawrence Central’s rival – has produced multiple NBA players, including Mike Conley Jr. and Greg Oden. Conley is a veteran point guard for the Utah Jazz. Oden, whose pro career was plagued by injuries, is the director of basketball operations at Butler University.

Joe Guy basketball in Lawrence is as normal of an activity as surfing is in Oceanside, Calif.

“It was just what (Kyle and his friends) did,” he said, referring to his son’s long hours in the gym working out.

Joe Guy graduated from LC in 1995, and even though Kyle graduated in 2016, he still keeps a close eye on the school’s athletic teams. He’s not surprised that LaRavia has turned into a solid player.

Joe Guy was especially impressed with his Jan. 22 performance against North Carolina, in which the junior dropped a career-high 31 points in a 98-76 win over the Tar Heels.

“Who drops 30 on North Carolina, you know what I mean?” Joe Guy said.

Not many people do, which is why LaRavia – an All-ACC second team selection in his lone year with the Demon Deacons – decided to forgo the remainder of his collegiate career and pursue the draft instead.

That decision paid off when NBA Commissioner Adam Silver called his name in the first round as the 19th player off the board.

“This is a dream come true,” LaRavia told reporters at a recent press conference. “I’ve been dreaming of this moment ever since I was a kid, so hearing my name called, it was such a surreal moment for me, (and) just being able to celebrate (with) my family and friends, it was an experience I ain’t never going to forget.”