After all, it’s not the first time he’s been succeeded by Tim Phares, who became principal of Creekside Middle School when Harmas left to lead CHS in 2017. 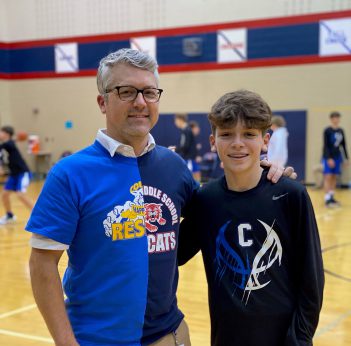 Harmas said he’s known since taking the CHS job that this would be his final school year, as his son is part of its graduating class. He’s also ready to transition from a workweek that typically stretches between 60 and 80 hours to a lifestyle that leaves time for travel, including to all of the nation’s Major League Baseball ballparks.

“As you get older, you slow down a little bit,” Harmas said. “I want to make sure that I leave when I can do the job and I love the job and not get to a point where I can’t do the job the way I think it needs to be done. Right now is a good time for that.”

Harmas, 61, worked at schools in Avon, Tipton and Mt. Vernon before opening Creekside in 2004. He said opening Creekside and helping to launch it into the high-achieving school it has become is among his career highlights, as well as his prioritizing that teachers focus on ensuring students have the tools they need to succeed at CHS.

He said the last several years have been especially tough for educators but that it did not factor into his decision to retire.

“Anybody would be lying if they didn’t say the last three years have been very, very difficult, but they’ve been difficult on everybody,” Harmas said. “Watching what we’ve been able to do and how we’ve come through it, that really gives me hope and gives me energy instead of making me tired.”

Phares, 45, the son of two educators, has spent his entire 22-year career in education at CCS, beginning as a kindergarten teacher at Orchard Park Elementary before becoming assistant principal at Prairie Trace Elementary. The longtime Carmel resident served as principal at Orchard Park and Towne Meadow elementaries before moving to Creekside.

As he worked his way through various roles in administration, Phares said he considered pursuing a job as a superintendent, but the COVID-19 pandemic allowed him time to pause and reflect on his career. He decided he did not want to become too far removed from daily interaction with students.

“I like being around kids, and that’s where I can have a big impact,” Phares said. “I’m the luckiest guy. I’ve been driving back and forth, wearing this path out between Carmel High School and Creekside the last three weeks, and I’m like, ‘Man, what an opportunity and what a responsibility to be the principal of Carmel High School.’’

He said he’s ready to listen and learn as he adjusts to the culture – and sheer size of the building – at CHS.

“My handprint will be on things, but it will take time,” Phares said. “The tradition of excellence throughout Carmel High School has been here before Dr. Harmas, and it’s going to be after me. My goal is to keep moving it upward.”

Phares’ four children attend CCS schools and his wife, Renee, is a front office administrator at Carmel Middle School. She previously taught at Forest Dale Elementary and worked at Creekside during Harmas’ tenure there.