“But it is a role I am beyond honored to play,” the Fishers resident said. “In such a vibrant story, I love that the whole world slows down for a minute or two to focus in on the small generosities of someone who is overlooked by almost everyone who passes her by. It (‘Feed the Birds’) is such an intimate song that’s truly one of my favorite moments in the entire show.”

Beef & Boards Dinner Theatre will present “Mary Poppins” from May 19 to July 10 at the Indianapolis venue. 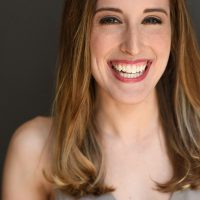 “The Bird Woman is one of the first to really break through the challenging exterior of the Banks children and see their hearts,” Mathias said. “She finds joy and contentment in simple pleasures, and she reminds us all to look outside ourselves and care for those around us.”

Mathias said she views the Bird Woman as a bit magical like Mary Poppins.

“I think both women can see people for who they really are in a way that is kind of mystical,” Mathias said. “Mary Poppins helps reunite the Banks family through a series of games and experiences, and I think one of those is an interaction with the Bird Woman.”

Mathias performed in the title role of Mary Poppins in Civic Theatre’s productions of the show in 2015 and 2018. So, she has time to examine the role of the Bird Woman.

“I do think that this is a woman who, in the story, has been disenfranchised and isolated for a long time without a lot of options, and that definitely takes a physical and emotional toll on a person,” Mathias said. “Creating a character is all about empathy, and there’s so much opportunity to explore that in playing the Bird Woman.”

Mathias said she envisions that her character probably hasn’t had a chance to sit down all day and her shoes are probably worn, so her hips and feet might ache.

“It’s cold and rainy, so her body is sore and tired from trying to stay warm,” Mathias said. “She cares deeply for others but likely doesn’t have a lot of loved ones in her life, so she extends her kindness to the creatures around her, like her sweet little family of birds.”