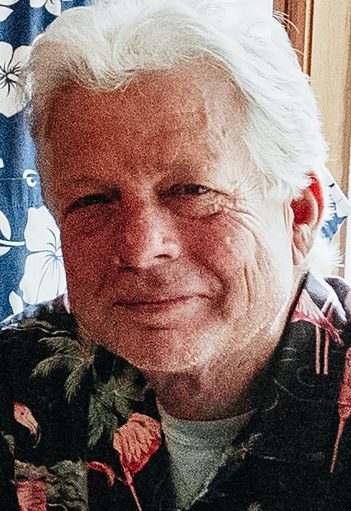 He was born Sept. 14, 1953, to Paul Frederick and Elizabeth Rake in Philadelphia, Pa. His parents preceded him in death.

He is survived by his wife of 27 years, Theresa (“Terry”) Titus Rake; his daughters Sarah Alexandra (Kole) Kleinrichert and Olivia Grace Rake; and his stepson, Jonathan (Melinda) Matthes.

Known publicly for his stage presence as a guitarist in a number of bands down through the years, he very well might have owed his showmanship to his mother. When he was a 1-year-old, with her having an acting background, she dressed him as Winston Churchill for a parade – complete with rubber cigar and riding in a carriage.

At age 6, the family moved to New Orleans, La. Tom attended John J. Audubon School and grew into a love of music native to that atmosphere. Consistent with his mom’s nature, Tom always was dressed up for Mardi Gras and witnessed two weeks of parades in that season every year. Memorable to that period in his life was an occasion when he was “apprehended” at the levee by railroad police for placing rocks on the tracks and brought by them to his home where they, in the presence of his parents, made him an honorary inspector to make sure no child, especially one like himself, ever played in that area again. Otherwise, he was a model child with few lapses into chicanery such as fishing in the Audubon Park lagoon fish hatchery or occasionally snatching a ball off the golf course in that park.

In 1962, the family moved to Winston-Salem, N.C. The atmosphere was classic Andy Griffith, where Tom played in the woods, learned to love the family’s beagle, Gomer, and went to High Rock Lake to water ski and fish.

By 1964, the Rakes had relocated again, this time to Evansville, Ind., where grandparents lived and provided new experiences, including opportunities to visit the Clifford house above the Ohio River at Blue Bluff, where he learned to swim the Ohio to the “sandbar.” Among other things, he starred on the Hebron Elementary School baseball team with a noteworthy home run for a squad that otherwise lost every game. Boating on the Ohio River became an important part of his life, but it paled in comparison to playing the guitar as taught by his dad, an accomplished musician. Having discovered that musical gene, as well gifted with his mom’s penchant for the show, Tom became the leader of the Bossmenn Band from ages 15 to 17, playing in numerous venues in and around Evansville.

Tom’s matriculation at Indiana University was marked by his fraternity experience in Beta Theta Pi and later, attendance in a junior-year-abroad program in Freiburg, Germany. Ever popular with the guitar, Tom, also known as Hondo to his musician friends, immediately was engaged to play in a German rock band, and that probably dominated his European studies with wide-ranging travels. Eventually, he returned to the United States and moved to Atlanta, where he pursued a musical career playing in different bands, often with opening gigs for better-known artists.

After 10 years of chasing that dream, Tom returned to Indiana University where he obtained an MBA degree. Thereafter, he held various financial and accounting jobs, and he moved to Zionsville. In 1995, he married Terry at “the shack” overlooking the Ohio. She was instrumental in fulfilling several of Tom’s then-newer dreams, including bringing a stepson, Jonathan, into his life and giving him two daughters, Alexandra and Olivia. Many happy years followed with trips to almost every state, including North Carolina and their beloved destination, Bald Head Island, and Europe, all while simultaneously continuing a role as lead guitar player in several local bands and helping Terry plan and run the crowning business achievement that is Titus Bakery, a hugely successful, three-location enterprise.

Among Tom’s most significant personal attributes included a dry sense of humor; turning every quirk and disappointment of life into a stream of laughable moments; a show of empathy when most needed; a gracious kindness complimentary to those who knew him; a relentless curiosity about all the attributes of life; an erudition of some consequence; a wanderlust that had him always ready to go and travel; a practical love of family and family institutions; a careful reverence for doing things in a meticulous fashion; a love of music and an understanding of harmony; a penchant for chasing a golf ball around 18 holes; a profound love of the family’s many pets; and courage and perseverance without complaint in the face of unspeakable pain and immense suffering to continue life for the sake of family and future. Above all else, he loved his family with all he could muster, once telling a friend in a quiet moment, “They are everything to me, each of them.”

Also surviving are Tom’s older siblings, Helen E. Rake, Philip C. Rake and Paul A. (Jill) Rake, as well as extended family and a roster of friends too long to count.

The family is working to develop a scholarship fund in Tom’s memory to benefit young Boone County musicians. Details will be available as soon as it is finalized.