A Google search led Sam Costa on a journey.

“Back in ninth grade, my friends and I were all searching our names in Google to see if there were any celebrities/historical figures with the same name,” Costa said. “That’s when I came across the Sam Costa Half Marathon. After looking more into it, I knew I had to come up and compete in it one day.” 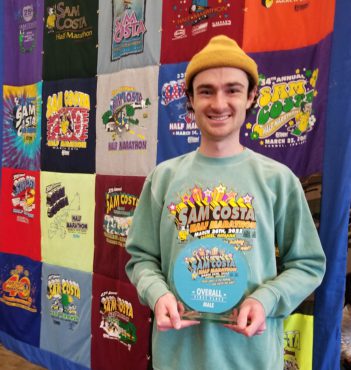 That day came and Costa, 24, not only ran in the March 26 race in Carmel but was the overall winner in 1:13.09 seconds. The race was named for the late Sam Costa, a Chicago police detective and runner who died in  1972. The late Costa became friends with several Indianapolis area runners while competing in the Central Indiana Striders Half Marathon. The friends later decided to rename the race.

But this Sam Costa, a 24-year-old from Buford, Ga., was running his first half marathon ever.

Costa, however, is an accomplished runner, competing in cross country and track and field at his Georgia high school and then at Georgia Tech from 2016-21.

“After looking at race results from past years, I knew that I had a good shot (at winning) based on how training was going,” Costa said. “But I was surprised that I won in those weather conditions. I’m not quite used to racing in the snow and high winds.”

“I’ve heard about Sam Costa ever since I moved (to Carmel) just under two years ago,” Read said. “My neighbors told me about it, since it runs through our neighborhood. I was so excited to finally get to run it this year. I train on much of the course on my daily runs anyway, so I knew the area. I ran the full course during my 20-miler two days before the race. It felt like home field advantage. I knew where the inclines were and where the wind would hit hard. I was a little apprehensive when I woke up that morning to snow on the roads.”

Read said she even reached out to see if the race was still happening.

“Not being from the Midwest, I am not used to this weather happening in late March,” she said. “But I am always up for a challenge. By the time the race started, the snow on the roads and trails were melted for the most part. I seem to race better in cold weather, which is hilarious, because I hate the cold.”

She ran her personal best by 57 seconds.

“Since we live by the course, my husband, two sons and sister-in-law got to see me twice, once in the first mile and then again at mile 12,” Read said. “Hearing my 2-year-old yell ‘mama’  while pointing at me, and seeing my 5-year-old jump up and down, made that last mile so fun.”