You are at:Home»Current in Fishers»Fishers Community»Students learn about German heritage

The assignment instructions were: “Hopefully, you’ll recognize an area or business you know and learn more about the meaning of the name.” 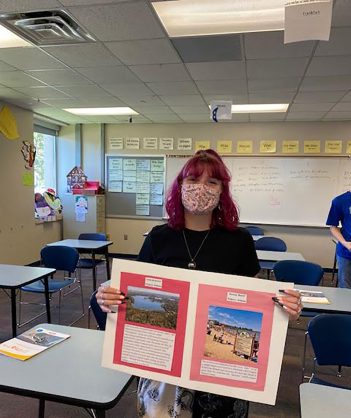 Students in Nichole Mathews’ German language courses completed projects that explored the history behind German names and places of businesses in the Fishers area. The projects were on display in Fishers City Hall during October.

“It makes their work feel more meaningful, Not just having a project that only I see, but the community is able to see their work, too,” Mathews said.

Through the students’ research, they not only learned more about the specific people but also about how and when their ancestors came to America.

One of the businesses featured was Fritz in Fishers, a local used car dealership off of 116th Street.

“The president of Fritz in Fishers, Fritz Kreutzinger, actually got to go see the project at City Hall. That was pretty cool,” Mathews said.

Through the assignment, students gained a greater appreciation for their German education and are more engaged in the material, Mathews said.

As Mathews plans future projects and assignments, she wants to continue incorporating the community into her curriculum. During a unit studying food, the class partnered with the Fishers Fire Dept. and showed a video about food health and safety.