You are at:Home»Current in Carmel»Carmel Community»Carmel cyclist to take 100-mile charity ride on Buffalo Bike

Dave Schweikert developed a special plan for the 200th time he has ridden a bicycle 100 miles in one day. 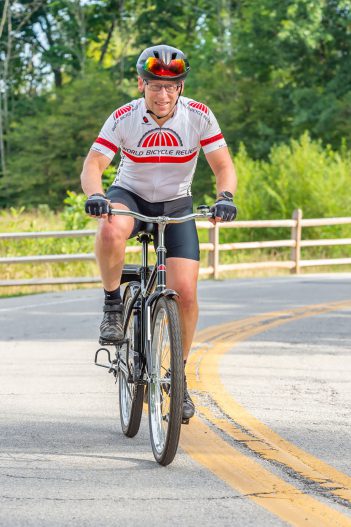 “The Buffalo Bikes are used primarily by teachers and health care workers,” said Schweikert, who moved to Carmel less than a year ago after living in Noblesville for 25 years. “One of the bicycles costs $147. I’m hoping to get a lot of people out to join me for a little or a lot. I basically ask people to contribute $1 a mile. If you come out and ride 5 miles with me, throw in $5. They can use any bike.”

Schweikert will start at 7:30 a.m. in Midtown in Carmel, ride up to Noblesville and then travel east around Indianapolis, eventually coming back through Zionsville and returning to his starting point.

Schweikert has never ridden 100 miles on a Buffalo Bike, which is more difficult than a normal 100-mile ride because it is on a heavier, durable steel bike.

“The farthest I’ve done is 25 to 27 miles on the Buffalo Bike,” he said. “I’ll do a few other training rides on it, but I won’t do that far. That’s part of the challenge to do something new that you’ve never done before. It will get hard, and I’ll get tired, but I’m going to do it because it’s important to me to set big goals and try to accomplish them.”

Schweikert said he does the rides to challenge himself, raise money for World Bicycle Relief and engage the community.

“I think people are capable of more than we let ourselves think we are,” said Schweikert, who said he likes to inspire children with his rides.

Schweikert is an engineering manager for SRAM, which makes bicycle parts.

“In Indianapolis, we make carbon fiber wheels,” he said.

Schweikert set a Guinness World Record by riding his bike around Carmel’s first and largest roundabout (Main Street and River Road) for 24 hours in 2019 for World Bicycle Relief. He completed 376 miles with more than 3,000 laps.