You are at:Home»Current in Westfield»Westfield Community»Fighting for inclusion: Students, parents protest after WWS superintendent tells them he wants to remove Pride flags, BLM flags from the classroom

The event was organized by GLSEN of Central Indiana, a local chapter of a national organization that advises on, advocates for and researches comprehensive policies designed to protect LGBTQ students and students of marginalized identities.

The local chapter was formed as a response to Westfield Washington Schools Supt. Paul Kaiser’s announcement to a group of students that he would request flags, such as Black Lives Matter and Pride flags, to be removed from the classroom. The announcement comes despite diversity, equity and inclusion being deemed a top priority for parents during the public input phase of a new superintendent search prior to Kaiser’s hiring. 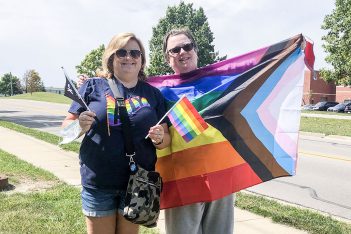 Sara Draper, left, and Leanne Bertino express their support at the protest. (Photo by Anna Skinner) 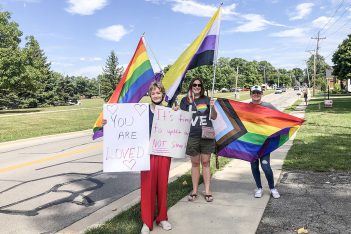 “The purpose of GLSEN is to make sure students have a safe space and that students have the resources they need,” chapter organizer and Westfield resident Alisha Hunter said. “The superintendent is pulling out any sign he deems political, like BLM or LGBTQ.”

Hunter calls the local chapter “officially unofficial,” as it is completing the last steps of an accreditation process. She said the flag removal hasn’t been formerly announced by the district.
“It’s not a policy, it’s a procedure,” said Hunter, whose three children are WWS students. “It’s something Dr. Kaiser gets to decide. Myself and another parent spoke to him and he has said this has been his decision and not a rumor.”

Despite multiple requests, WWS administration has refused to meet with Current until the district has a policy in place on the matter.

Motorists drove by throughout the protest and showed support by honking, waving Pride flags and cheering for the protestors. Hunter said although many teachers have emailed GLSEN organizers to express their support, they also expressed fear for their jobs by attending the protest. Many teachers also expressed fear of losing their jobs by attending protests under former superintendent Sherry Grate’s leadership. Grate resigned at the end of 2020. Kaiser was hired in May. 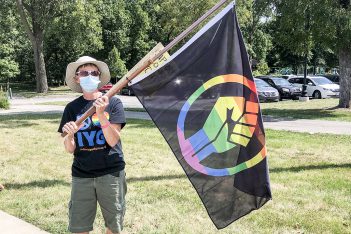 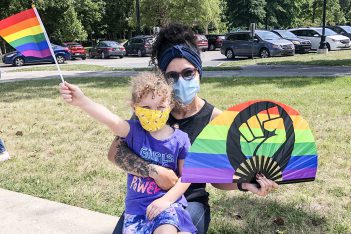 WHS senior Maddie Kilgore, who identifies as a lesbian, views the decision to remove Pride flags from the classroom as an attack.

“Hearing this was directly discriminatory toward who I am as a person,” she said. “We are just here existing. It’s not fair to silence us just because we exist and are proud of ourselves.”

Kilgore lauded the school’s teachers and called them “amazing.”

“They sacrifice a lot just to make their students feel safe,” she said. “We are learning about all these different cultures and people (at school), and we need to be included in that. It should not be an outrage that we exist and are proud of who we are. It’s not fair that as kids, we have to fight against adults who want to take that away from us.”