You are at:Home»Current in Westfield»Westfield Cover Stories»Like a HAWK: Westfield uses new signal to improve safety of Monon crossing at 161st Street

Among the City of Westfield’s missions is to make navigating its trails as safe as possible.

One area of particular concern has been the Monon Trail crossing at 161 Street, where there have been three vehicle accidents this year and several near-misses.

City of Westfield City Engineer John Nail said a tunnel is being designed for that crossing for the future.

“We’ll physically have the trail go under 161st Street, which solves the problem with pedestrians and vehicles,” Nail said.

“When U.S. 31 was upgraded, the pilings (walls) and ceiling of the tunnel were installed. City council members will have to decide, probably this fall, if they would like to fund this project and move it to construction,” Gardner said.

If approved by the council, the tunnel could cost up to $6.5 million.

In the meantime, Nail said the city council directed his department to look into a much cheaper option with the HAWK, or high-intensity active crosswalk, signal at the Monon Trail and 161st Street crossing. The HAWK signal cost $50,000 since the city could use already existing infrastructure.

“The HAWK system is basically a pedestrian traffic signal, so when a pedestrian comes to the crossing they activate this HAWK system, which lights up and turns red, the vehicle stops and allows the pedestrian to cross at the location,” Nail said.

“We want to get education out to our residents, because the HAWK system is (new) to our city and we want to make sure everyone knows how to react with this system,” Nail said.

To activate the system, the pedestrian pushes a button, which is similar to a push button used at a traffic signal to cross. After the pedestrian crosses, the signal stops flashing to signify to motorists that it is safe to drive across the crosswalk.

“We did a speed study at all of our crossings to look at how speed interacts with safety components at these intersections, so we’re actively monitoring all of our crossings to make sure we are being as safe as possible,” Nail said. “The incidents we have seen at that crossing have often been rear-end collisions where a driver stops for a pedestrian and the person riding behind that car is not expecting the driver to stop and they end up rear ending.”

Nail said the city also receives many reports about near misses between pedestrians and vehicles at the crossing.

“The reason we’re focusing on this crossing is because it’s our busiest at-grade crossing, where the trail and roadway cross at the same elevation. It’s not separated in any way,” he said. “The vehicular traffic at 161st Street and pedestrian volumes are the highest in our city. In addition, we have concerns about cyclists and general speeds at the crossing as well. We’re trying to be proactive in addressing the concerns rather than reactive and waiting for more pedestrians to be injured at this crossing.”

For more on the HAWK signal, visit youtube.com/watch?v=VcczRMyAcK0. 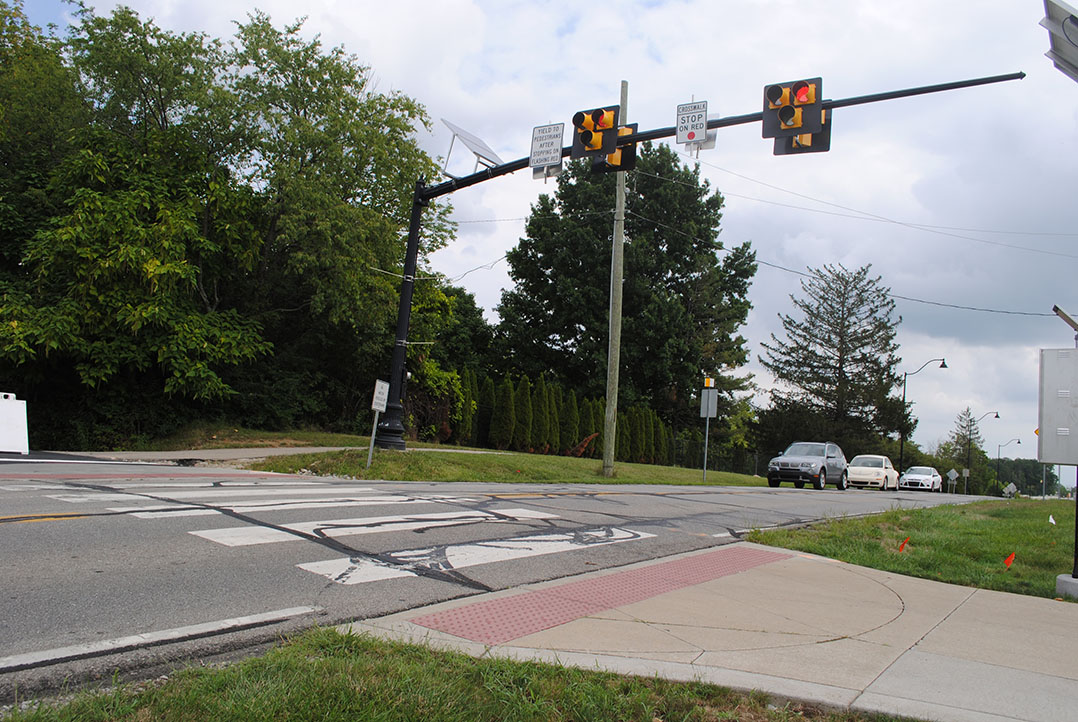 Taking care on the trails

Westfield Parks and Recreation Supervisor Christopher McConnell said every few years the parks department partners with the police department on an informational campaign to make sure trail users are aware of proper etiquette, not only at the trails but also at the crossings.

“We do our due diligence to make sure everyone is as safe as possible, not only on the trail but obviously when they are coming up on the crossing,” he said.

McConnell said cyclists or runners should pass on the left and call out loudly their plans.

“When you are getting ready to pass or overtake another trail user, for example, if you are on a bike and getting ready to use the right of way and pass a pedestrian who is going slower, you should alert them by saying ‘passing on the left,’” McConnell said. “So then (pedestrians) are aware you are there and you are not stepping out into their lane of travel and causing an accident or the potential for an accident.”

Traveling with appropriate speed is another issue.

“Don’t be flying down the trail,” McDonald said.

For more, view the Travel the Trails with Care on the City of Westfield’s Facebook page.