“I have now become a huge fan of her amazing talent,” she said. 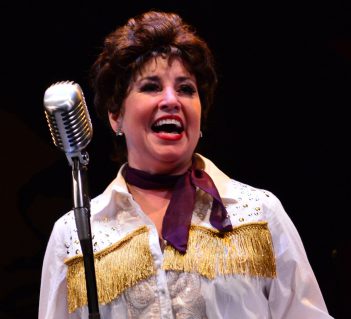 Judy Fitzgerald will reprise her role of Patsy Cline in “Always…Patsy Cline.” (Photo courtesy of ATI)

Fitzgerald portrayed Cline in Actors Theatre of Indiana’s production of “Always…Patsy Cline” in 2013. She and fellow ATI co-founder Cynthia Collins, who played Cline’s friend Louise Seger, will reprise their roles in the two-woman musical Sept. 10 to Oct. 3 at the Studio Theater at the Center for the Performing Arts in Carmel.

Cline died in a plane crash in 1963 at age 30. The musical serves as a memory piece for Louise.

“I think of each song as filtering through Louise’s mind as she remembers each experience, so many times through the radio and then in person,” Fitzgerald said. “Think of the way songs touch people during different times in their lives, from tapping your hand on the steering wheel to crying in your kitchen. This is truly Louise’s story.”

“Their story is a rare one,” Collins said. “To correspond with each other after meeting for just one night is a testament to both of them and the connection they obviously had. The two women stayed in touch all the way up to Patsy’s death. There is no doubt they would have continued their correspondence if not for Patsy’s passing.” 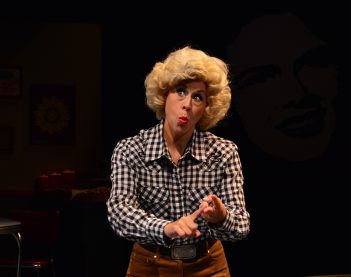 Cynthia Collins will reprise her role of Louise Seger in “Always…Patsy Cline.” (Photo courtesy of ATI)

Collins said Seger was a single mother from Texas.

“What I found on Louise was all connected with Patsy Cline, of course, (it was) letters she kept from Patsy, which is the basis of the show,” Collins said. “She was a character, for sure. Bold and funny. However, the way Ted Swindley created the character of Louise was done with creative license. It is pretty common for a writer to put their spin on a person. That spin makes the show what it is — Louise is the comic and Patsy is the straight man. It works wonderfully.

“Make no mistake, though, Mr. Swindley doesn’t gloss over tender moments, which gives the audience an insight into these two women and their lives.”

Collins and Fitzgerald are joined on stage by The Bodacious Bobcats Band led by Nathan Perry. Perry returns from the original production along with Greg Wolff on drums, Greg Gegogeine on bass, Kathy Schilling on fiddle and two newcomers, Matt Day on guitar and Michael Clark on steel guitar. Terry Woods returns as the musical dIrector.

“It never crossed my mind to play the role of Louise back then,” she said.

Collins said her late father was a huge fan of Cline. For his 80th birthday party, Collins performed a medley of Cline’s songs.

“I didn’t come close to sounding as good as Judy does on her music, though,” Collins said. “She has that deep, rich quality that Patsy Cline had. It’s what made Cline as distinct and unique as she was, what made her a star.”

Fitzgerald said she loves all of Cine’s music, so it’s hard to pick a favorite song.

“I do love ‘Gotta Lotta Rhythm In My Soul’ and ‘San Antonio Rose,’ but they are all terrific,” Fitzgerald said.