You are at:Home»Current in Zionsville»Zionsville Education»Athlete of the Week: Colin Price is right for Zionsville football team

Zionsville Community High School senior running back Colin Price has all the attributes.

“He’s an all-around back,” Eagles coach Scott Turnquist said. “He’s got great speed. He’s got really good vision. He’s a guy that attacks all the time. He’s a downhill runner. He loves to be physical, and he finishes runs. He’s an all-around great athlete, so he does everything really well. He can beat you in multiple ways. He’s very versatile, which makes it easy for his teammates, coaches and play callers.”

Turnquist said he is valuable catching the football as well.

“We can split him out as a receiver and he protects well,” Turnquist said. 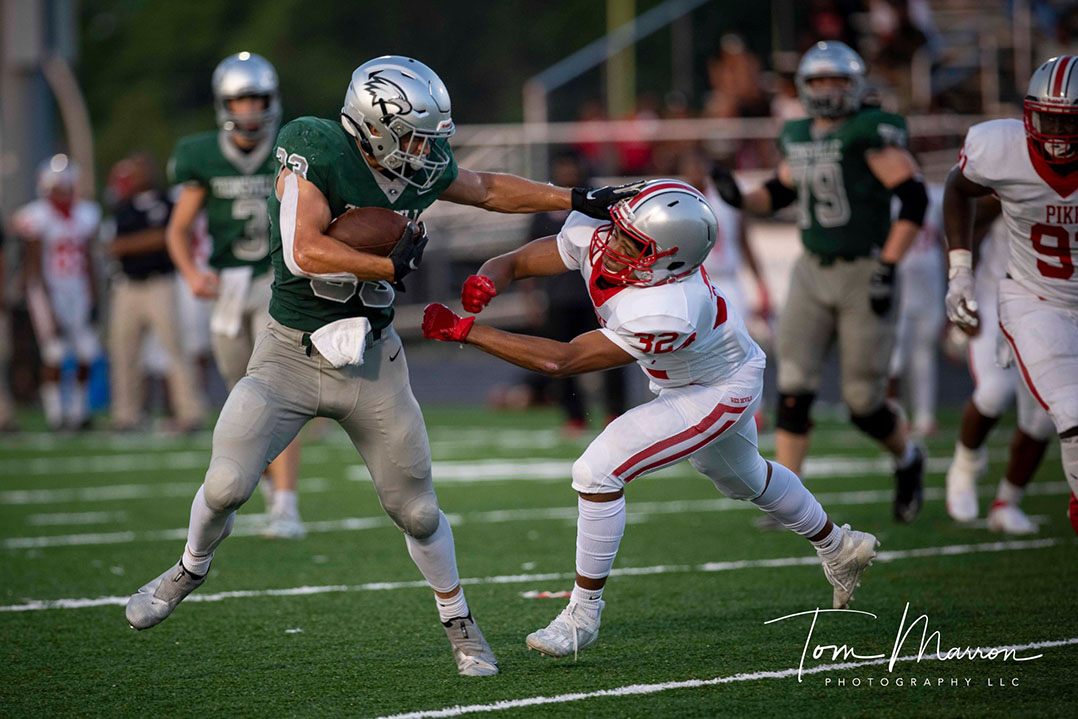 “He’s a guy we can always rely on physically and mentally, too, as a leader and as a great teammate,” Turnquist said. “He’s a guy we lean on.”

The Eagles won their season opener as Price rushed for 202 yards on 27 carries with two touchdowns Aug. 20 in a 28-10 victory against visiting Pike.

His career high is 257 rushing yards against Westfield as a sophomore.

“I’ve gotten a lot better at anticipating cuts based on how the linebackers are flowing,” Price said. “Slowing down the game has also gotten easier with the experience that I’ve gained over the past few years.”

The Eagles reached the Class 5A state championship game last year before losing to Cathedral 46-28.

“This team has the potential to be as good if not better than last season,” Price said. “We have a lot of experience on both sides of the ball, which will help us in the long run. Going to state and coming up short has definitely made me hungrier to prove what we can do as a team. Our goal this year is to do what it takes to get back to Lucas Oil and finish the job.”

Price said he has gotten more comfortable with being a vocal leader.

“Now being a senior, I have to take the responsibility of being extra vocal in order to share whatever knowledge I have with my teammates,” he said.

Turnquist said he knows Price will do great thing individually.

“We just want to make sure he’s spreading the wealth of experience and talent he’s had, and he’s done a great job of that this year,” Turnquist said.

Price, who also is in an outfielder on the high school’s baseball team, plans to play football in college. He has received offers from Hillsdale, Eastern Illinois, Butler, Northwood and Findlay.