You are at:Home»Current in Fishers»Fishers Community»Athlete of the Week: Runner Satterfield seeks to help HSE win state title

Hamilton Southeastern High School senior cross-country runner Nolan Satterfield has set high expectations for the team and himself for the season. 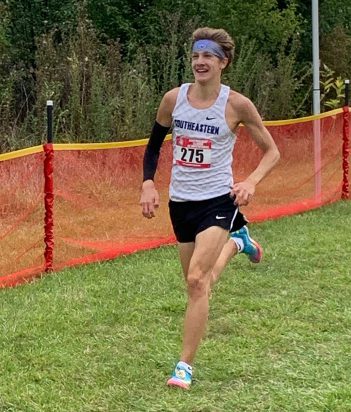 Satterfield finished ninth in the 2020 IHSAA boys cross-country state meet in a time of 15:53.9, helping the Royals to a sixth-place team finish.

“Individually, I’m setting the bar at a top-10 finish again,” Satterfield said. “I’m putting in a lot of work and I’m putting in a push for top five this year. As a team, we definitely have a lot of talent. We are returning all of our guys that scored last year.  We’re all going to be seniors that will be scoring for us. We want to win a state championship and that’s our goal. We know it’s going to be hard work, but we know we can do it.”

Following his freshman year, Satterfield decided to give up basketball and concentrate on cross-country and track. His father Brian Satterfield was the boys basketball coach at the time. After 20 years as the boys head coach, Brian will coach the girls basketball team this season.

“His dedication has been good, but I’ve seen an even greater shift with him and his teammates as they prepare for this season,” Brian said. “The chemistry appears to be great, which is always a key for success. From a Royals coach standpoint, I hope this group realizes the opportunity they have and push each other to be as good as they can be.  From a dad standpoint, I hope Nolan continues to be a leader and builds on what he accomplished last year.”

Satterfield said his training was a little different for track.

“I focused more on speed and I didn’t get as much mileage, but I focused on the mile,” Satterfield said. “I won sectional and regional in the mile (1,600) with (a personal record) 4:20. I made it to the state meet and didn’t perform super well. I went out a little too hard and it came back to bite me, but overall, the season went well.”

Satterfield said the speed training might help in the cross-country season this fall.

“I ran a much faster 800 time than I ever had before,” he said. “I really worked on my kick as well. I have my endurance back up there. I’m feeling very fit. Now that I have the speed in my legs, I feel that putting those two together is going to help me a lot my senior year.”

Satterfield was coached by his mother, Deb, who previously was the boys and girls cross-country coach at HSE Intermediate/Junior High.

To get ready for the season, Satterfield said he is doing all he can off the course, getting more sleep, eating better and working on ways to help his recovery time.

“Basically anything I can do to stay healthy and make sure I have a better senior season,” he said.