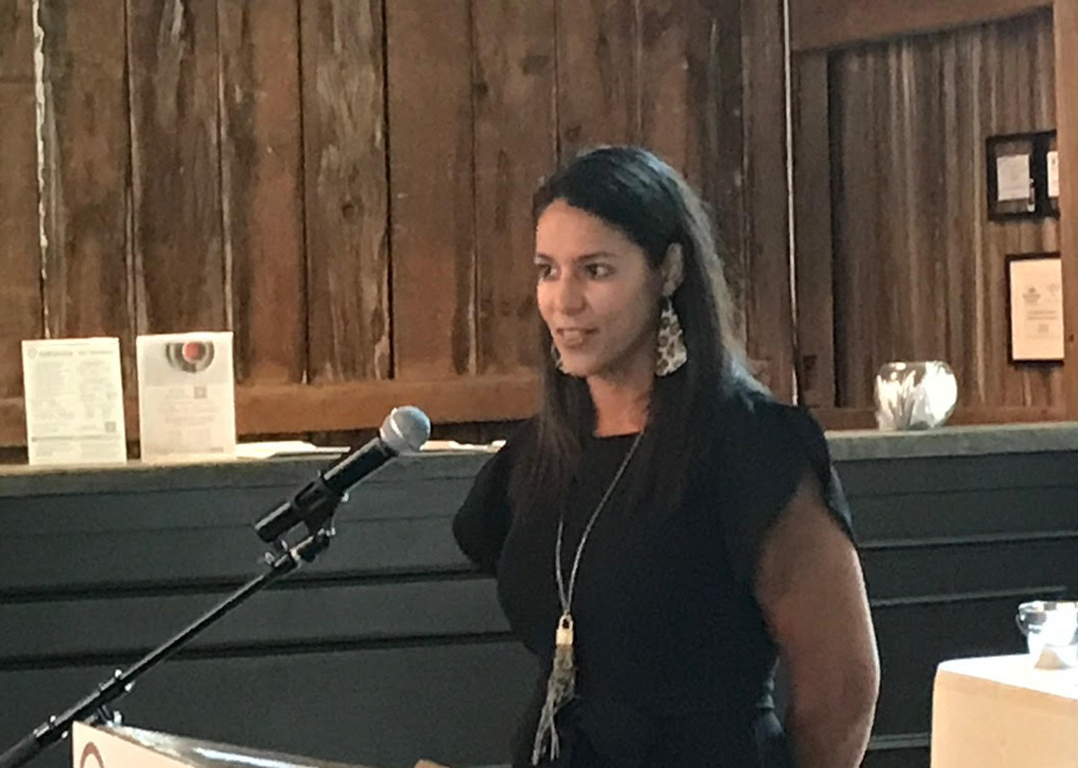 Given the extremely shaky start of her academic career, Stacy Atkinson seemed an unlikely candidate to become chancellor of Ivy Tech Hamilton County.

“I can tell you I wouldn’t be standing here today if I didn’t take a lot of risks,” Atkinson said. “I’m not supposed to be here.”

The Westfield resident shared her journey with the Noblesville Chamber of Commerce’s Women in Noblesville Annual Leadership Luncheon audience July 28 at Mustard Seed Gardens in Noblesville.

English is not Atkinson’s first language as her parents and sisters spoke Spanish at home.

“I grew up thinking educators are the most important people in the world,” Atkinson said.

Her mother wondered why her daughter wasn’t learning English in second grade in New York City, so her mother went to the principal.

“Something was wrong with me. I was in English as a Second Language classroom with 24 other Spanish-speaking students and a Spanish-speaking teacher and at no point was I going to learn the English language,” Atkinson said. “So, my mom protested to get me taken out of ESL, which they didn’t want to do in Brooklyn in the late ‘80s. She fought, and she is the reason I can speak the English language. She is the reason I have been taught to be bold and be brave. My mom taught me to speak even if your voice is shaky. Her voice was very shaky. She is a teeny, tiny woman, 5-foot-1, who didn’t speak the English language but made sure she got her point across and got me pulled out. My mom is my hero.”

Atkinson had attended kindergarten at 4 years old, so she graduated high school at 17.

Atkinson said she was used to be awakened by her mother at 6:45 a.m. every day. She lost that discipline going to college.

“My neighbors were playing beer pong on a Thursday night and I was really good at beer pong,” she said. “If you need a partner, call me. At 8:15 Friday morning I had a Spanish class, the language I spoke, and I’m not getting up at 8:15 to go to Spanish class. About one year of not going to classes, and you wake up with a 1.1 GPA. Your parents end up with a college loan of 62,000 green American dollars.”

Atkinson’s mother was mad. She finally asked what her GPA was.

“When she found out, she said, ‘There are a lot of things I don’t know, but this ain’t good,’” Atkinson said. “One is good in most places. This is not one of those places. She packed me up in her green Ford Taurus and took me home. She said, ‘You don’t have to pay rent, but you have to get a job, and, by the way, we’re done with college.’”

Atkinson said her mother told her she could pay for college on her own.

“Again, I was unsuccessful going to classes and this time I got a 1.2 GPA,” she said.

That encouraged her to join the U.S. Marines, so she could figure out college. During her five years in the Marines, she did just that. She earned a bachelor’s degree and two master’s degrees. She eventually earned a doctorate in adult learning and development from Lesley University.