You are at:Home»Current in Geist»Geist Cover Stories»Cool to be kind: Moo and Lou serves up shaved ice, spreads goodwill

Moo and Lou Frozen Treats and More sells shaved ice, but for owners Paula Strauss and her daughter, Lacy Ross, the business is all about spreading kindness and joy.

“Seeing the smiles on people and the kids’ faces after they take their first bite of their shaved ice is just awesome, and it makes us smile, too,” Strauss said.

The Moo and Lou food truck has become a fixture around Lawrence the last three years. It’s painted purple to honor Strauss’ late daughter, Maddie Ross, and is decorated in flowers and caricatures of Maddie and Lacy. Strauss’ daughters also inspired the name of the business.

“Moo and Lou are our daughters. Maddie is Maddie Moo and Lacy is Lacy Lou, and so we just went with their nicknames that they had growing up, and it has just blended well and sounded good and was kind of catchy,” Strauss said.

Catchy wasn’t Ross’ initial reaction to seeing her likeness on the side of a food truck.

“At first I was kind of embarrassed, like, ‘Oh, jeez, why does she have to have my face on it?’ But I’ve gotten used to it,” Ross said. “It’s cute. Most people will see me working in the truck and be like, ‘Oh, are you the Lou?’ So, people think that’s just pretty cool.”

Moo and Lou’s was born out of the Maddie Smiles charity’s Act of Kindness Day, held June 29 every year. Maddie Smiles was founded by Strauss in 2016 after her daughter, Maddie Ross, who suffered from spina bifida and hydrocephalus, died on June 29, 2014, from complications during gall bladder surgery. Maddie was 19 years old.

“We started going around to the different fire stations and police stations and government center and giving ice cream to say thank you for the service of our first responders,” Strauss said.

The challenge for Strauss was that it was difficult to expect discounted or donated product every year from frozen dessert companies to just be given away without compensation. Her husband, David Strauss, came up with an idea to start their own food truck to sell shaved ice so they could give it away at other times as an act of kindness.

The organization still celebrates an annual Act of Kindness Day. In 2021, the business gave away hundreds of shaved ice servings at approximately six stops around the city throughout the day. No customer was charged for a treat during the entire 12-hour day.

“The world needs kindness,” Strauss said. “Maddie had such a kind spirit. She wanted people to be happy. We’ve always been a philanthropic family and have raised the kids to be kind. We try to inspire others to be kind as well.” 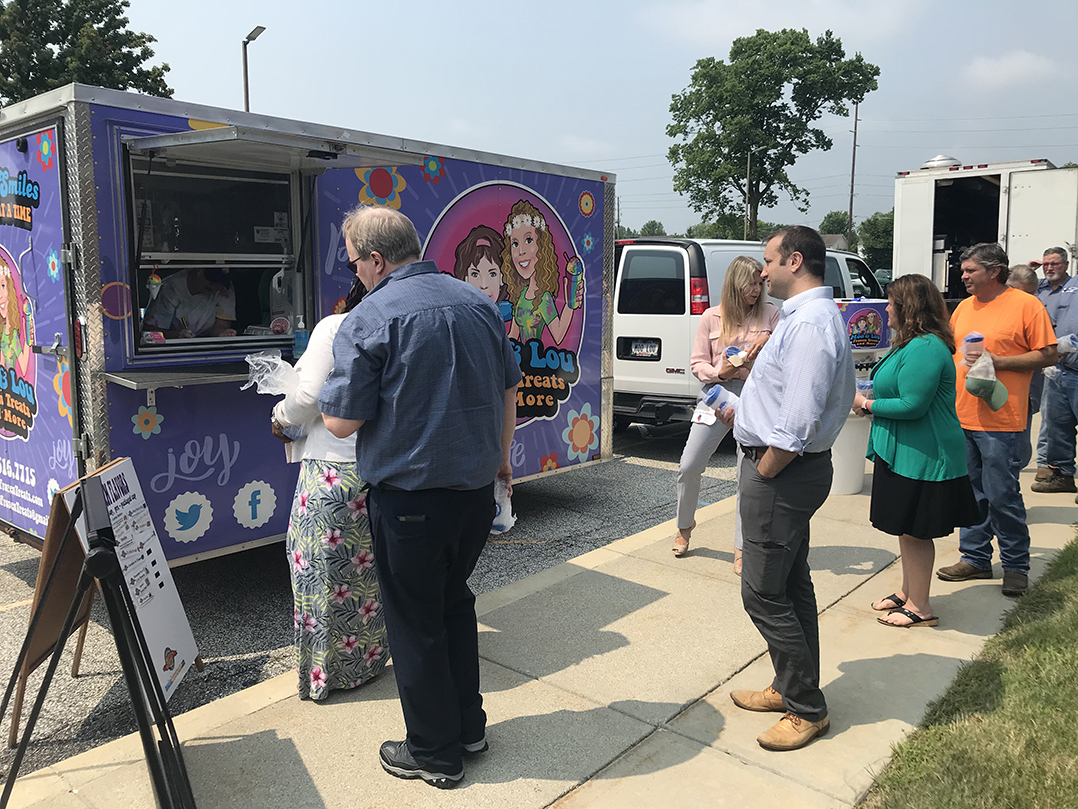 Customers wait their order at the Moo and Lou food truck. (photo by Jonathan Matthes)

Moo and Lou’s hits the road four to six days a week and is almost always manned by Strauss and Ross. The mother/daughter pairing became more significant to Ross after she became a mother herself earlier this year when daughter, Sophia, was born in February.

“Before you become a parent, you can be like, ‘Ugh, I’d rather be doing this or that. Why does my mom always want to hang out with me?’” Ross said. “But now that I am a mom, I understand that desire to always want to be with your daughter and how special it is to be able to do things together and make those memories.”

The truck serves two main items: shaved ice and Sundae’s ice cream, which they also combine into one concoction.

“We learned about (combining shaved ice and ice cream) from some people from Hawaii while we were out doing an event,” Ross said. “They were telling us, ‘Yeah, this is how they do it in Hawaii.’ It makes it more creamy, that’s for sure.”

The setup time for Strauss and Ross is minimal.

“There’s no grease messes or grills to clean, so that is nice,” Ross said.

In the morning, Strauss goes to Ross’s house to pick up the truck, which is stored there. They resupply it after each day, so in the morning they double-check to make sure everything is in order. Then they drive to their stops for the day and set up.

Ross said it takes about 15 minutes to go from parking the truck to serving shaved ice. The lengthiest part of the set-up is putting the flavor station in place outside the truck.

The company has two trucks but usually deploys one at a time unless they are at a bigger event, like Fourth Fest. Flavors range from the typical, like strawberry, to the imaginative, like zombie virus, a mixture of lemon-lime and blueberry. Servings are frequently mixed in a rainbow of flavor combinations.

For more and for a schedule of where Moo and Lou’s can be found, visit facebook.com/mooloufrozentreats. 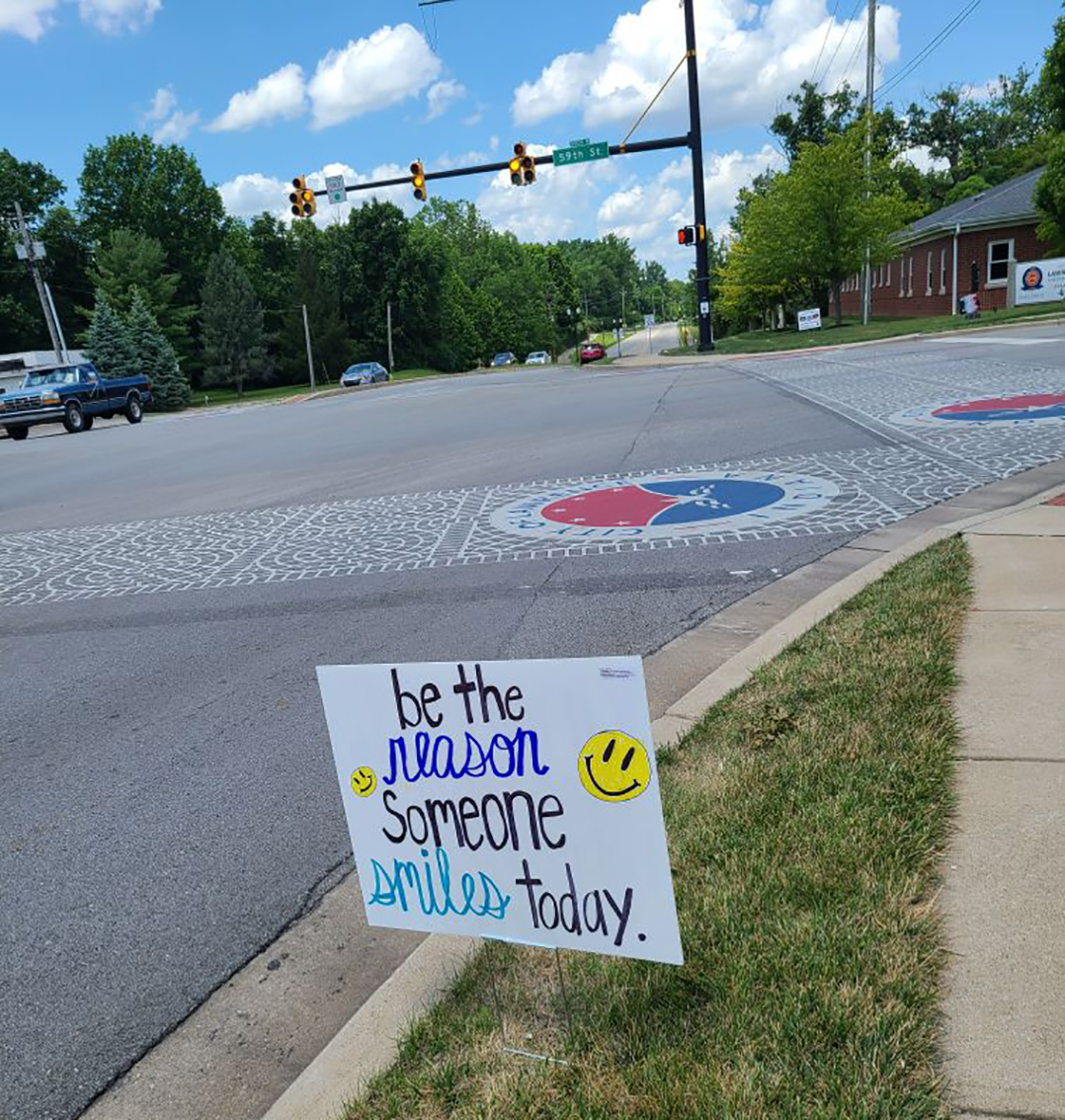 Maddie’s Smiles is a Lawrence-based charity aimed at promoting kindness throughout the city. It is run by Paula Strauss and Lacy Ross.

“We are local to Lawrence, so we usually try to stick with helping others in our local community,” Ross said.

The charity focuses on sharing kindness and joy. It presents events like Easter Eggstravanza, which involves more than 1,000 eggs with uplifting notes inside, or Strauss and Ross make handmade kindness yard signs.

“It’s supposed to just catch your eye, make you smile for a second and make you think that there’s still good in the world,” Ross said.