A pitcher who recently completed his junior season at Miami (Ohio) University, Bachman was selected in the first round of the Major League Baseball Draft by the Los Angeles Angels. The 2018 HSE graduate was the ninth-overall selection in the draft. 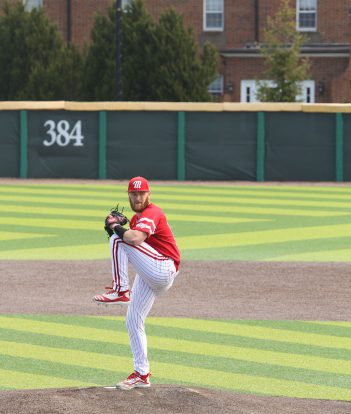 Sam Bachman, who was selected in the first round of the Major League Baseball Draft, delivers a pitch for Miami (Ohio) University. Bachman is a Hamilton Southeastern High School graduate. (Photo courtesy Miami University Athletics)

Bachman, a 6-foot-1, 235-pound right-hander, watched the draft on a projector screen on campus with family and friends. As the draft unfolded, he went into a conference room and eavesdropped on a phone call between his Houston-based advisory team and the Angels’ front office as the two sides negotiated to make sure monetary compensation lined up with Bachman’s draft slot.

Bachman then left the conference room in time to hear his name announced as the ninth-overall pick by MLB Commissioner Rob Manfred.

The moment was emotional for Bachman, the first player in Miami history selected that high in the MLB Draft.

“I didn’t think I was going to tear up. I didn’t ever tear up, I cried,” Bachman said. “It was awesome to share that (moment) with my parents next to me and with everyone behind me. There were a lot of mentors, teammates, coaches, friends, family, people that have really made sacrifices to help me along the way.”

The 2020 college baseball season ended abruptly because of the COVID-19 pandemic, with some teams literally getting pulled from the field during games and being sent home. At the end of that season, Bachman said he was not a projected first-round player. He was told by his coach, Dan Hayden, to expect to go somewhere between the seventh and 10th round.

But Bachman, who is coming off a stellar junior season, had higher expectations for himself.

“I knew the plan I had to execute, and I knew what it would take, and that’s a whole lot of sacrifice and doing things the right way, and 100 percent buy-in,” Bachman said.

Coming off a career-best season, Bachman ranked in the top 10 in the nation in strikeouts per nine innings (4.37), earned run average (1.81) and hits allowed per nine innings (3.93). He led the Mid-American Conference in nine categories and earned first-team all-conference honors. His fastball exceeds 100 mph and has hit 91 mph with his slider.

“I don’t want to short-change how talented Sam is, but his separator is his discipline and his work-ethic,” Hayden said. “That’s why he’s at where he’s at. Sam didn’t take the easy path to get here. He went through adversity over and over again to (be drafted so high).”