The City of Fishers is encouraging residents and visitors to show their support for locally owned businesses this month.

“As our community continues to lead the state with one of the highest COVID-19 vaccination rates, I encourage our residents to seize the summer and get out to shop, dine, play and explore,” Fishers Mayor Scott Fadness stated in a press release. “Support the local businesses who help to make a Fishers smart, vibrant and entrepreneurial community.”

This is the second time Shop Fishers has been presented in the summer. The campaign has been held for nearly a decade in the fall to coincide with Small Business Saturday in late November.

“These (small) business owners are part of our community. They are part of the fabric that makes Fishers so unique and vibrant,” said Stephanie Perry, Fishers assistant director of community and public relations. “They are our neighbors and friends. Maybe even if it is a franchise, they are still a local business owner. We want our residents to see how important these businesses are to Fishers and go out there and support them.”

Each participating business is offering deals or discounts throughout the week. At Blush Salon Boutique, 8800 North St., Suite 181, customers will draw tokens for 10, 20 or 30 percent off their purchase. The Fishers Arts Council, 1 Municipal Dr., is offering 10 percent off all artwork on display in its gallery inside City Hall. Fishers Cryotherapy, 11789 Commercial Dr., is offering a buy one cryotherapy session, get one free deal.

Some of the participating businesses have deep roots in the area. Taylor’s Bakery, 8395 E. 116th St., is now operated by Drew and Matt Allen, the great-grandsons of Dennis O. Taylor, who founded the original location in 1913.

“Fishers is just experiencing explosive growth, and that’s going to attract change. I moved out here in 1982 with my parents and Fishers was fewer than 5,000 people. All there was was small, family, private businesses,” Drew Allen said. “I want to see those businesses thrive. We support all of Fishers businesses, but it is nice to see some emphasis on the small guys.”

Taylor’s Bakery will offer a buy one, get one free sale on all cookies.

“What we really want to showcase is the decorated 4-inch cookies,” Allen said. “We have cookies for everyone.”

Some of the businesses are newer, such as Chao Vietnamese Street Food, 7854 E. 96th St., which is owned by Carlos Villagran Arias and Victoria Huong Vu. It has been open since 2015.

“We try to keep (the food) really, really classic Vietnamese, but then we also have a lot of different specials where we try to accentuate some of the other types of dishes from other cultures like Mexican or French and mix them with Vietnamese,” Villagran Arias said.

For Shop Fishers, Chao will offer 10 percent off any purchase with a mention of the campaign.

“I like that we are trying to do a big community effort to keep people in Fishers and shopping small businesses in Fishers,” Villagran Arias said. “I think it’s cool that they are focusing on small business owners to promote a very homey yet very modern town.” 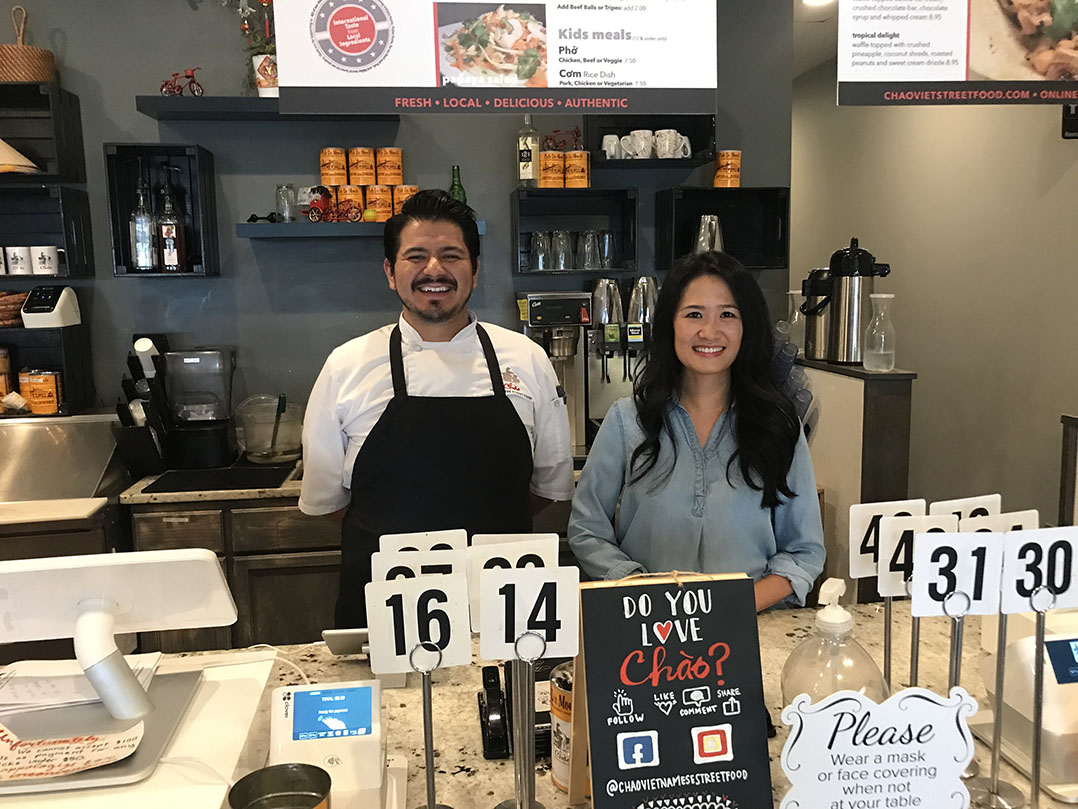 Carlos Villagran Arias, left, and Victoria Huong Vu inside Chao Vietnamese Street Food restaurant that they partnered together to found six years ago.

From refugee to restaurant owner

She grew up in a restaurant–owning family in her native Vietnam, but she found the amount of work and hours spent running the restaurant was daunting. But life soon took an unexpected twist.

Huong Vu’s daughter fell in love with banh mis, Vietnamese baguettes, during a visit to Vietnam, but Huong Vu said “it’s really hard to make just one.” So, she would make them for others, and they became popular.

Friends frequently encouraged Huong Vu to open a restaurant, which happened in 2015 after she was introduced to restaurant co-owner Carlos Villagran Arias.