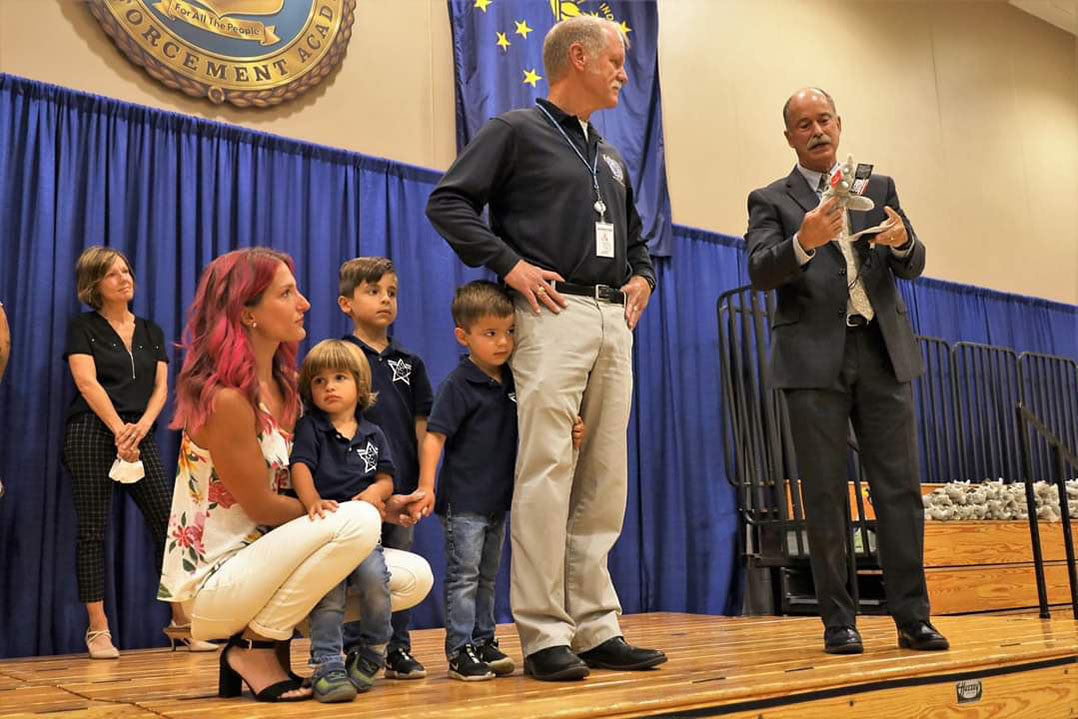 From left, Stephanie Pello with her sons, Grey, Gabriel and Miles, her father, Jeff Groh, and Tim Horty of the Indiana Law Enforcement Academy with a rhino at the June 22 ILEA graduation. (Submitted photo)

Stephanie Pello’s 4-year-old son, Miles, knows he can find comfort by hugging his stuffed animal when he is having a bad day.

He wanted police officers having a bad day to have the same feeling.

“My friend from Carmel High School, Molly Gregory, who has been with the Carmel Police Dept. for two years, had witnessed her first suicide on the job and was very upset about it,” said Pello, who lives in Carmel with her husband, Zach, and three sons. “Miles was talking about police officers that day and we had mentioned Molly and how she had a difficult day. He asked if police officers get sad, do they have a stuffed animal like his monkey to make them feel better. We explained that yes, police officers get sad and that we weren’t sure if they had a monkey like him. He was ready to go in the basement and collect all of his stuffed animals to hand out to sad police officers. We told him that maybe we can hand out an animal to some officers who need a hug. He chose rhinos because he said they are big and strong.”

Thus, Rhinos for Rockstars was started.

Pello’s father, Jeff Groh, is retired from the Bureau of Alcohol, Tobacco and Firearms and now works for the Indiana Dept. of Corrections. The first rhinos Miles collected were given to Groh, Gregory and Groh’s close friend, Doug Carter, of the Indiana State Police.

“He was telling him about the idea and Doug was thrilled and said that he wanted to be one of the first to receive one,” Pello said. “Then Tim Horty from (Indiana Law Enforcement Academy), who is also close friends with my dad, invited us to hand out the rhinos to the tier 1 and tier 2 graduating class (June 22). Those combined ended up to be 145 rhinos. We were able to get 120 donated by friends and family.”

Pello said Miles has been invited back to every ILEA graduation, but because that happens every eight weeks, it might be hard to collect that many each time.

“To think that we would consistently be able to raise 100-plus every eight weeks is scary,” Pello said. “At this point, I think we will try for a graduation a couple of times a year, depending on how many we can get with donations. Although we love the fact that we gave out the first big batch to all of the newest officers, ultimately, we want to focus on those officers who have had bad days, which is why Miles wanted to start this from the beginning. Those are the officers who need to know that there is a little boy who thinks they are rock stars, heroes, and who just wants to give them a hug.”

To donate for the stuffed animals, visit eventbrite.com/e/rhinos-for-rockstars-tickets-160285531339.