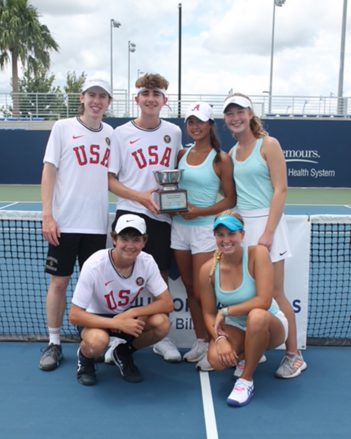 “It was very cool to win as a team from Indiana and represent the Midwest,” said Brune, a 2021 Carmel High School graduate. “People don’t usually expect Indiana to be better than teams from New York, California, Texas, etc.”

The Central Indiana team, which included three other players from Carmel High School, beat California 35-24 (combined total games) July 1 in the championship at the United States Tennis Association national campus in Orlando. Central Indiana, which qualified by winning the Midwest Section title in March, won all five matches in the national tournament, beating a New York team in the semifinals.

This was the 25th anniversary of World Team Tennis, created by tennis legend Billie Jean King.

“As a senior, it was a great way to go out on a win, and it was also kind of sentimental just to be with everyone one last time,” said Brune, who plans to play club tennis at the University of Alabama.

The team was coached by Cheryl Loy, whose daughter, Lucy Loy, was one of the six players. Lucy, a 2021 Fishers High School graduate, will play tennis for the University of Nebraska next season. Lucy said California was the toughest opponent.

“Other teams were good, but no one could play doubles like they could, so they really tested us there,” Lucy said. “I didn’t doubt we were going to win. Our singles definitely helped us pull ahead in the match.”

Brune played No. 1 singles and Antony played No. 2 singles on the CHS team, which won the IHSAA girls state team title June 5.

“The keys to winning World Team Tennis Nationals was definitely the ability to work together and support each other,” said Antony, who plans to play club tennis at Indiana University. “By cheering for each other during matches, our team bond proved to be strong. This national tournament was my last junior tournament match ever, so it was really special to go out on top. Being Emma’s teammate from state finals to WTT nationals was really awesome, because over the years we have been able to persevere through so many challenging matches.”

“In this format, you can be as loud as you want, so we had fun cheering each other on,” Lucy said. “We played to our potential I felt. Our doubles dominated and helped secure wins. My mom was the coach, and she was a great encourager and just wanted us to go out there and stay positive and have fun.”

McNamar and Mercer were on the Greyhounds’ state championship team in October 2020. McNamar, who will play for Marian University next season, won the individual doubles title as well with Srisanth Malpeddi.

“It was great to experience multiple championships during my senior year, especially since last summer there was uncertainty if we would even be able to have a season due to COVID-19 restrictions,” McNamar said.