You are at:Home»Current in Carmel»Carmel Community»The story behind the Carmel firefighter’s parade route proposal

Carmel firefighter Garrett Locke said his heart “was pounding a million miles an hour” as he handed out plastic fire helmets to children on the CarmelFest parade route, knowing that he had a much more valuable gift he soon planned to present to another parade attendee.

Near the Corner of Range Line Road and Main Street, Locke stopped the July 5 procession to lead his girlfriend, Jaclyn Lewis, from the crowd into the middle of the street, where he dropped to one knee and asked her to marry him. 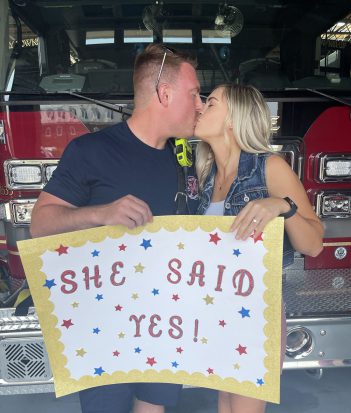 After recovering from the initial shock, Lewis said yes. The couple celebrated as confetti rained down and other members of the Carmel Fire Dept. displayed posters announcing the good news.

Lewis said July 7 that she wasn’t surprised that Locke proposed, but she never expected it to occur as it did.

“I did kind of suspect something was coming, but I had no clue the whole parade was going to halt for that to happen,” she said.

Locke, 28, said he decided to pop the question at the parade because many of the Westfield couple’s friends, family and co-workers would already be in attendance. Plus, event organizers had decided to honor health care heroes during the parade, and Lewis, 27, is a nurse at Ascension St. Vincent Hospital in Indianapolis.

“What better time to do it than in front of everyone we know and where we work? It seemed the right time,” Locke said. “Jaclyn is not a flashy person at all. She doesn’t like to be the center of attention, but I got to thinking, ‘What is a way I can make it fairytale-ish or movie-esque? At the time, I didn’t know if it would be completely over the top, making her the center of attention on her special day.”

The couple met in 2018 at PointBlank Nutrition on 146th Street, where Locke worked and Lewis, a bodybuilder, was a customer. They eventually began dating, but a month later their relationship got put to the test when the National Guard sent Lewis to Fort Sill in Oklahoma for seven months.

During that time, Locke and Lewis had very few opportunities to communicate, which they did mostly through letters. But instead of pulling the couple apart, it drew them closer together.

“It made our relationship flourish and get stronger, because we really had to put down how we felt and our feelings in those notes and connect on a deeper level,” said Locke, a 2011 Carmel High School graduate.

The couple doesn’t yet have a wedding date or location picked, but they’re aiming to tie the knot in the fall of 2022.