You are at:Home»Current in Carmel»Carmel Community»Custom dress for HCLA leader celebrates Hamilton County

So, she had an idea to have her friend, Jerry Lee Atwood, create a 1940’s style red dress with all the names of cities and towns in Hamilton County embroidered on it. 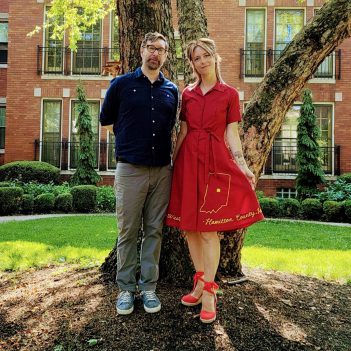 Marley worked with Atwood at the Indiana Repertory Theatre approximately 10 years ago. Atwood worked in the costume shop while Marley worked in the wardrobe department. They worked together on costumes for “A Christmas Carol” and “The 39 Steps.”

During the many costume changes of “The 39 Steps,” Marley and Atwood became friends.

“He’s dressed a lot of celebrities,” said Marley, who moved from Carmel to Westfield in June. “He created custom outfits for Post Malone and Lil Nas X and has been featured in Vogue magazine. He worked hard over the years, so when I had a big event, I was excited to get a custom dress for myself made from him. I’m excited not only to support a local artist, support local business but to show my Hamilton County pride.”

Marley, a 1998 Carmel High School graduate who has been with Noblesville-based HCLA for three years and has served as executive director for a year-and-a-half, showed off the dress at the summit, which was held at the Embassy Suites Conference Center in Noblesville.