You are at:Home»Current in Carmel»Carmel Community»Carmel Marathon selected as qualifier for 2022 world age group championships 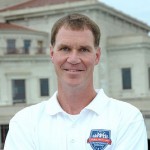 “It was supposed to launch in 2020, and it didn’t happen because of COVID-19,” Carmel Marathon race director Todd Oliver said. “It’s something new as a complementary program through the Abbott World Marathon Majors.”

The major marathons in the U.S. are New York, Chicago and Boston. The international marathons are Berlin, London, Dubai and Tokyo.

“The fastest runners in the world compete in the majors, and they get a huge purse prize,” Oliver said. “Abbott has added the next layer to that, which are the age group championships. This is for men and women 40 years and older only.”

Oliver said there are up to 300 marathons in the world selected as qualifying events where runners gain points.

The Abbott World Marathon Majors Wanda Age Group World Rankings comprise a one-year qualifying period during which athletes in nine age groups can compete in marathons around the world to earn ranking points. At the end of the qualifying period, the top-ranked runners in each age group will be invited to the Wanda Age Group World Championships. Oliver said the World Championships will be in London in 2021.

Oliver said runners’ positive responses about participating in the Carmel Marathon was likely a factor in it being selected despite being a smaller marathon than most of the others.

“We never thought we would get a nod for it because the marathons that are part of the program already are twice the size of us,” Oliver said. “It’s another feather in Carmel’s cap. We expect to get a percentage of folks who chose Carmel in 2022 because we are a global world qualifying event for age group championships.”

The Carmel Marathon Weekend date in 2022, one of the first spring races in the Midwest, will be held one week later than the traditional first Saturday in April. The races include a full marathon, half marathon, 10K, 5K and marathon relay.

“It buys us 11 minutes of daylight for our start time,” Oliver said of starting a week later in the spring. “Those 11 minutes can be big in terms of safety for our volunteers getting out on the course, setting up the water stops.”

The race will now be conducted at the end of spring break week for Carmel Clay Schools instead of the start of the week.