A trio of local students’ business won first place at an Indianapolis regional high school business-pitch competition, and though the three did not win the state-level competition they plan to continue their business.

Isaiah “Izzy” Branam, who will be a senior at Zionsville Community High School, and Emma Hamilton and Krishna Thiru, who will be seniors at Brebeuf Jesuit Preparatory School, have partnered with nine Carmel High School student coders to create FIA, a software that aids businesses in their hiring process.

The young entrepreneurs, who describe themselves as being like siblings, presented their idea at Innovate Within, an Indiana high school business-pitch competition, on April 30 and won first place in their region. As winners, Branam, Hamilton and Thiru were awarded $3,000, which they reinvested in their company, and an all-expenses-paid trip to Scottsdale, Ariz., in late June with other entrepreneurs and investors.

The team’s software uses predictive machine learning and personality testing to create a “more efficient and accurate representation of what a company culture should look like,” Hamilton said. It analyzes not only job applicants’ resumes and skill sets but also their personality. The data helps businesses narrow fields of dozens or hundreds of applicants to those whose interpersonal skills would likely fit well with the business’ existing team.

“It can identify where the weak points are of this team and what we need to have more of to have a more well-rounded team,” Branam said. “And then it also gives us data points on team culture. We can then generate an algorithm we can feed the applicant data through to then rate, rank and sort the applicants by how much value they bring to the team and how well they fit into the existing company.”

Thiru said personality traits were a focus for the team because of the emphasis many companies have placed on workplace culture.

“Company culture matters a lot. A good company culture has greater long-term value creation for companies,” Thiru said. “We do the same thing as our competitors and go one step further to go into the personality (of the candidate).”

Hamilton said human resource departments in the U.S. spend thousands of hours and billons of dollars each year trying to find the right applicants, making the process time consuming and expensive. But she said it also tends to be “inaccurate a lot of times.”

“As people, we have a lot of unconscious biases,” Hamilton said. “We tend to hire people that look more like us or sound more like us or we just connect with more, but those people don’t necessarily always work together well.”

A beta test of the software is expected to launch in July after it had an 85 percent prediction accuracy rate in small-scale alpha tests. Branam said the team is eager to see what findings they can glean from the beta test. To participate in the beta test, visit Fiarecruit.com.

“We are really confident going into that,” Branam said. “None of us are really coders by trade. We put together a team of hungry high school coders that want to get their hands on a project and add something to their resume.”

In the early stages of developing FIA, the team wanted to see if their software’s solutions reflected the needs of businesses in their community, Branam said.

“When we were trying to get our idea out there, we reached out to a bunch of companies in the Indianapolis region,” Branam said. “We reached out with the goal of, ‘Hey, can we meet for 15 or 20 minutes and ask you about what pain points you have in your hiring process?’”

Local business leaders responded. In addition to receiving advice from local organizations like the Zionsville Chamber of Commerce, the team has met with talent acquisition teams at some of Indiana’s largest companies, including Cummins, Rolls Royce and Cook Medical Group as well as Purdue University.

“The more people we would talk to, the more we would actually find common themes of pain points we were targeting,” Branam said.

Through the course of nights and weekends, the team developed FIA, sometimes working out of a coworking space from 9 a.m. to 11 p.m.

“I think it ultimately comes down to how hard you are willing to work,” Hamilton said. “I think our willingness to put ourselves out there has been one of the things that has made us successful.”

“Us three, as a team, we fit together like puzzle pieces,” Thiru said. “If one person is lacking motivation or knowledge in one area, the other two can pick them up. So, I think together, as a team, we are really good about learning from anything, whether it’s failures or successes or other people. We are not afraid to ask questions because that’s where learning happens. In our minds, there is no such thing as failure. It’s super generic, but you either succeed or you learn.” 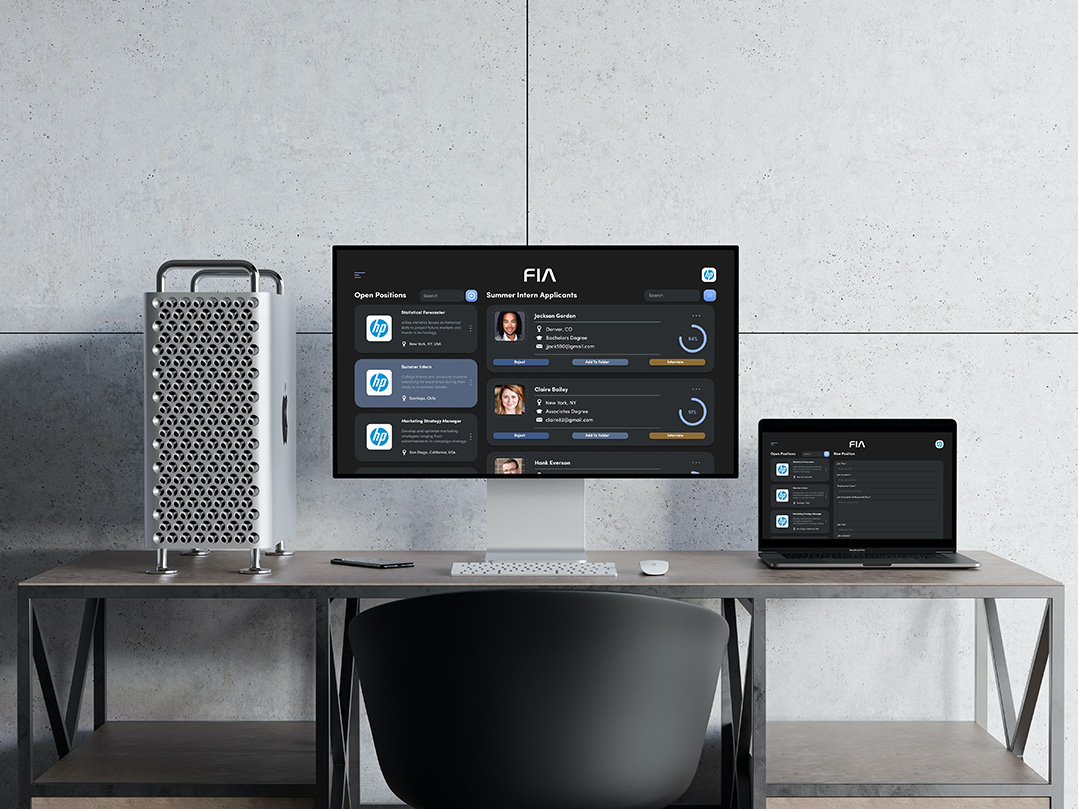 Isaiah “Izzy” Branam, Emma Hamilton and Krishna Thiru plan to continue their education in college and are considering attending the same university, but they are still considering the best courses for themselves and for FIA.

“Even if we don’t end up at the same college, I think we all hope to continue the business, regardless of where we are,” Hamilton said. “As for the future of FIA, I think it’s going to be very dependent on how successful we are with the beta and then making changes from there. But we are hoping to continue (FIA) in the future.”