You are at:Home»Current in Fishers»Fishers Cover Stories»Finding the givers: LLS Man and Woman of the Year both from Fishers

Rich Pentz and Rhonda Hoeft are the Indiana Leukemia & Lymphoma Society’s Man of the Year and Woman of the Year, respectively, but they share more than the title. Both are Fishers residents. Both are from Pennsylvania. And both lost their mothers to cancer.

Hoeft’s mother, Cindy Bird, was diagnosed with Hodgkin’s lymphoma at age 28 when Hoeft was 8. Bird survived for 15 years after her diagnosis, but the chemo and radiation treatments damaged her other organs. When she was 44, she received a heart valve replacement. After the surgery, she died because her lungs were not strong enough to begin working after the procedure. 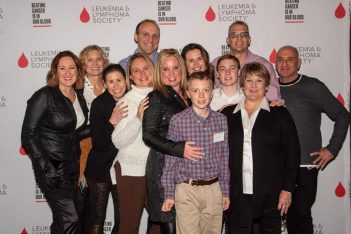 “She didn’t die from the cancer, but she died (because of) the cancer,” Hoeft said. “It was all the side effects of the damage from earlier.”

Hoeft started her Woman of the Year campaign when she was 45. Her mother was 44 at the time of her death.

“It was the first year I had outlived her, and that’s just a weird feeling,” Hoeft said. “I just wanted to honor her. It had been so long. She passed in ’98, and I wanted to do something to help others and not have to go through that.”

Pentz’ mother, Patricia Pentz, was diagnosed with acute myeloid leukemia in 2013 and died the following year. 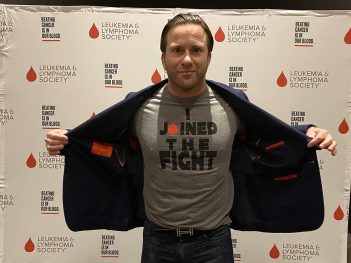 Rich Pentz is the LLS Man of the Year. (Submitted photo)

Pentz was inspired to become a candidate when a friend asked him how his mother was late last year, five years after she died, because the friend didn’t know she had passed. He realized many families who fight cancer do so alone.

The Man and Woman of the Year honors are granted to the candidates who raise the most money for LLS, but for Hoeft and Pentz, their inspiration wasn’t simply to earn the titles. The campaign launched in February and runs for 10 weeks, but it was extended to a 17-week campaign this year due to the COVID-19 pandemic. Candidates also had to think outside the box to fundraise because in-person events couldnt’ be held. Despite that, Hoeft raised $105,034.18 and Pentz raised $518,906.53 — the latter figure breaking the previous record by more than $1,000. They relied heavily on their connections to fundraise, receiving generous donatinos from family and friends.

“We had a March Madness event planned,” Pentz said. “We had St. Paddy’s in Chicago. We had an ‘80s band planning to play at the Vogue in late April, and there were a couple of big events planned at Notre Dame as well.”

Hoeft and her team had a bingo event planned at a local brewery, a party planned for a consulting network and smaller events as well.
All the events were canceled because of the pandemic, but Pentz and Hoeft didn’t let that deter them.

“I was hyper-focused on what we needed to accomplish. With COVID-19 hitting, there were no excuses. We had to readjust our goal,” Pentz said. “It was going to come down to my contacts in my phone and by all means my network. You tend to hang out with people like you, and a lot of my friends are extremely giving and philanthropical, so I think that was crucial.”

Although the candidates each won the campaign title, they never planned to make it about donations.

“Our goal from the start was to never ask for a donation. Our goal was to spread awareness and make an impact, and we did that through a series of stories,” Pentz said. “It’s all about the storytelling.”

When the COVID-19 pandemic hit, many people were unfamiliar with social distancing and what that entailed. But Indiana Leukemia & Lymphona Society Man of the Year Rich Pentz and Woman of the Year Rhonda Hoeft were all too familiar with the practice.

“Social distancing was new for some, but it’s not new for cancer patients,” Hoeft said. “So, we had to change our focus and say, ‘Cancer wasn’t canceled.’ Just because it had gotten tough (with the pandemic) didn’t mean we were giving up.

“We just looked for the givers.”

“(Cancer patients) are the ones who truly can’t go to the grocery store,” Pentz said. “When my mom was sick, I remember when we got groceries, we had to wipe everything down. She was isolated. If people did come visit, they had to have masks on and she had a mask on.”