You are at:Home»Current in Noblesville»Noblesville Community»Dye keeps her marathon date

“It was one of the most grueling conditions that it had for decades,” Dye said of the 2018 race. “It was below freezing, wind chill with 35 mph head wind. There was a lot of us that finished with hypothermia; that was me.”

Since the medical tents were overcrowded, Dye had to recover with other runners in a basement of a building. 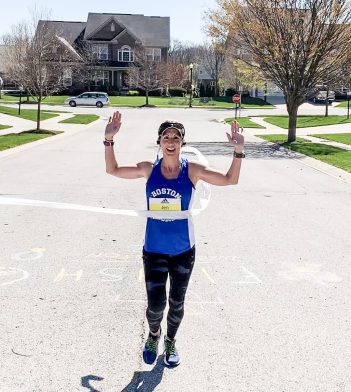 “I don’t remember much of it, so I had hopes of going back,” she said.

Dye lost feeling in her hands during the race.

“I think I wore gloves for two months after,” she said. “I never wanted my hands to be cold for a long time after that.”

So, the Noblesville resident was set to return to the Boston Marathon April 20, but it was postponed to Sept. 14 due to the coronavirus pandemic.

“I’m going to remain hopeful, but I don’t see anything with so many people happening for the rest of this year,” she said.

So, the 1991 Carmel High School graduate held her own COVID-19 Boston Marathon April 20 for her personal credit.

“I ran from my house through Noblesville and down through Carmel,” Dye said.

She had planned a 20-mile route but had to tack on some additional miles to get to 26.2 miles.

“It was nice cool weather with no wind so it was an ideal weather day for me,” she said.

Her husband, Dean, got a video of Dye crossing the toilet paper finish line that her two daughters, Addison and Avery, were holding for her.

“I got a lot of messages saying, ‘I hope you saved that toilet paper,’” said Dye, who ran the distance in 3 hours, 36 minutes.

When Dr. Kannan Natarajan, a St. Vincent co-worker, found out what Dye was doing, he said he was going to run a half-marathon to support her on the same day.

Dye has competed in seven previous marathons, including Chicago and New York, twice each. Her first was in Chicago in 2003.