You are at:Home»Current in Fishers»Fishers Community»Fisher man competes for Man of the Year

A Fishers man is raising awareness of blood cancer in honor of his mother as part of the Leukemia and Lymphoma Society’s Man of the Year campaign. Rich Pentz lost his mom to the disease in 2014.

“I was asked to do this two years ago but the timing wasn’t right, but I was approached again because people knew my story,” Pentz said. “This is a way to honor her.” 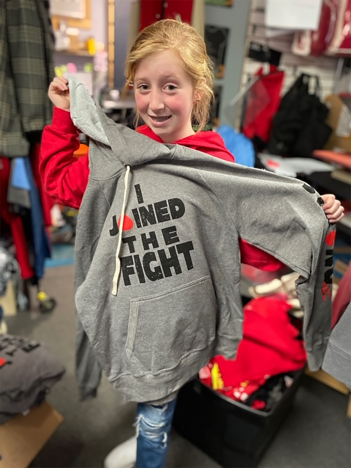 Audrey Wampler has teamed up with Rich Pentz to raise funds and awareness to fight blood cancer. (Submitted photo)

Pentz, along with more than a dozen others, is raising money and awareness for research and more effective treatments. The campaign was originally slated to last 10 weeks, but due to the COVID-19 pandemic, it has been extended past its original end date of May 9 to June 20.

“At which time we plan to host a grand finale celebration where we will announce our total 21 candidate group fundraising total,” said Jeff Johnson, LLS Man & Woman of the Year director. “Additionally, we’ll announce the Woman of the Year and the Man of the Year, the two individuals who have raised the most donations, during the 16-week competition.”

Althout Pentz is still fundraising, he is mindful of his approach in light of the pandemic.

“For me, it is more about raising awareness, and that is what we hope to accomplish,” he said.

Pentz had partnered with 12-year-old Audrey Wampler, LLS Girl of the Year, on a spring fashion line. Wampler battled acute B cell lymphoblastic leukemia for 2 1/2 years. She rang the Victory Bell, signaling the end of treatment, in July 2019. She’s in remission today.

Wampler and Pentz have created a line of tanks, hoodies and shirts.

“We started working in December (2019) to start the brainstorming process,”

Wampler said. “It was so fun to help put the creation together.”

“When we started this journey with leukemia, we weren’t sure where it would take us,” Kristin said. “I remember saying I wasn’t sure why this happened but there is a reason, and now we are starting to see that. It was so sweet how Rich took time to read Audrey’s bio and get to know her and to build his campaign around those who have battled cancer and those who continue to battle it.”

“Rich has so much energy and is so dedicated in the fight to save lives,” Audrey said. “It means so much to be able to help LLS and connect with others who are battling or who have battled.”