Sarah Gordon didn’t know much about hockey when her son, Carter, started playing it at age 6, but she was hoping it would be beneficial, on and off the ice.

Carter, who was diagnosed on the autism spectrum at age 5, quickly learned the sport and loved it. Mom and son were happy with the results.

“He always had difficulties with social interactions,” Sarah said. “His teachers would tell me he wouldn’t participate in groups, so I tried to get him in any activity or sport where he could get experience with groups of kids.”

The Gordons had previously tried soccer, but it did not end well. Sarah then received an email from Carter’s teacher about a hockey program for children with special needs called Indy Twisters.

“I though, ‘Let’s just try this and we’ll see what happens,’” Sarah said. “I had no experience with hockey whatsoever. Carter was only 6, and I didn’t know anything about the sport, so I was a little worried because it’s a very physical sport.”

But it went so well, it has become a regular part of the annual routine for Carter, who is now a sophomore at Fishers High School.

“We got through the whole year, and I thought, ‘We tried it, and we’ll go on to something else,’” Sarah said. “Carter comes to me in the summer and says he can’t wait to play hockey. I told him that was great, but the season doesn’t start until October. He asked me about playing hockey every day from that June until October.”

“My son went to a friend’s birthday party, and the child’s father had made a video of his brother’s special hockey team in Detroit,” Steve said. “He showed me the video, and when I watched it, I knew I needed to do that here.”

Tofaute then faced the monumental task of figuring out how to make it happen.

“It took a while to figure out where we would be able to play and practice,” he said. “The other part was that I needed to figure out funding so I could have enough equipment. I wanted to make it free for these families of kids with special needs.”

The team is comprised of 30 to 60 players. They range in age from 5 to 34. They never age out of the program. They’re placed on teams based on their ability.

The teammates aren’t the only ones who benefit.

“Both my son and daughter have been able to coach for the team,” Tofaute said. “They’ve learned compassion and helping others. I’ve been able to model that for them.”

The team practices every Sunday from 3:15 to 5:30 p.m. at the Arctic Zone Iceplex in Westfield. Carter, for one, couldn’t wait for the season to start.

“The coaches are nice, and it’s so much fun being there at practice,” Carter said. “I like coming back every year to see my friends.”

“It’s been so great being a part of this program,” Sarah said. “They really work with each individual where they’re at athletically. It’s something he looks forward to each year. And, he’s even started other sports because of this program.” 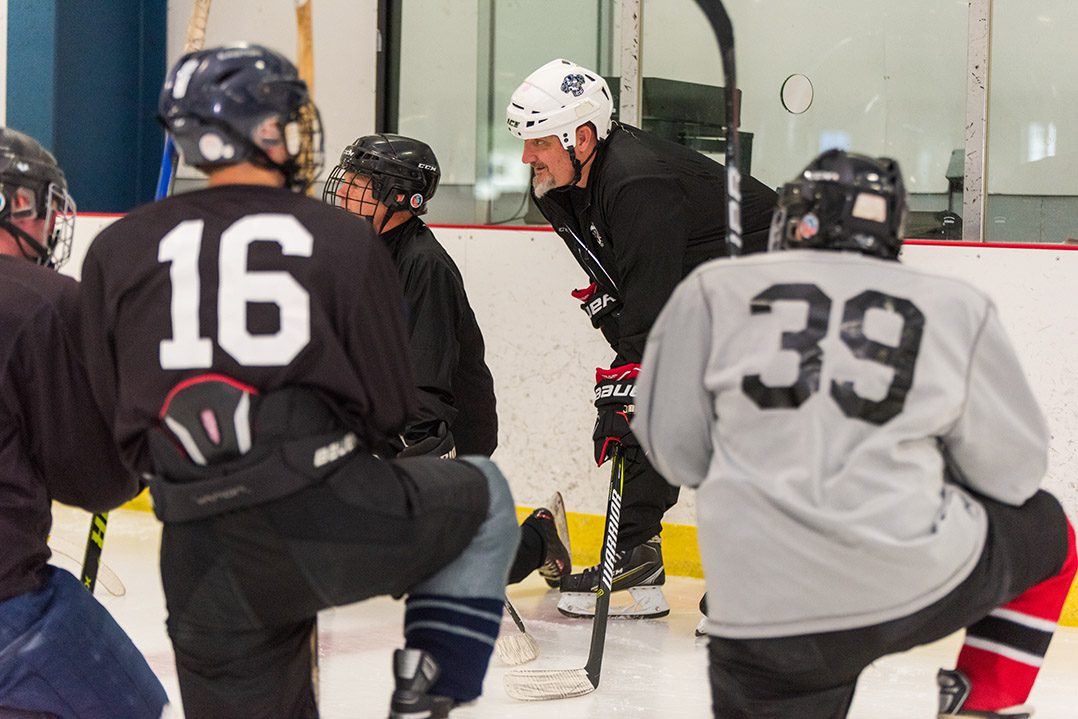 When did you start skating/playing hockey?

Who is your favorite player and team?

My favorite player is Pavel Datsyuk and my favorite team is the Detroit Redwings.

What is your profession?

Do you play any other sports?

I lift weights and bass fish when I can.

Watching Cameron Bowers hit for $1,000 in “Shoot the Puck” at the Indy Fuel game this past year.