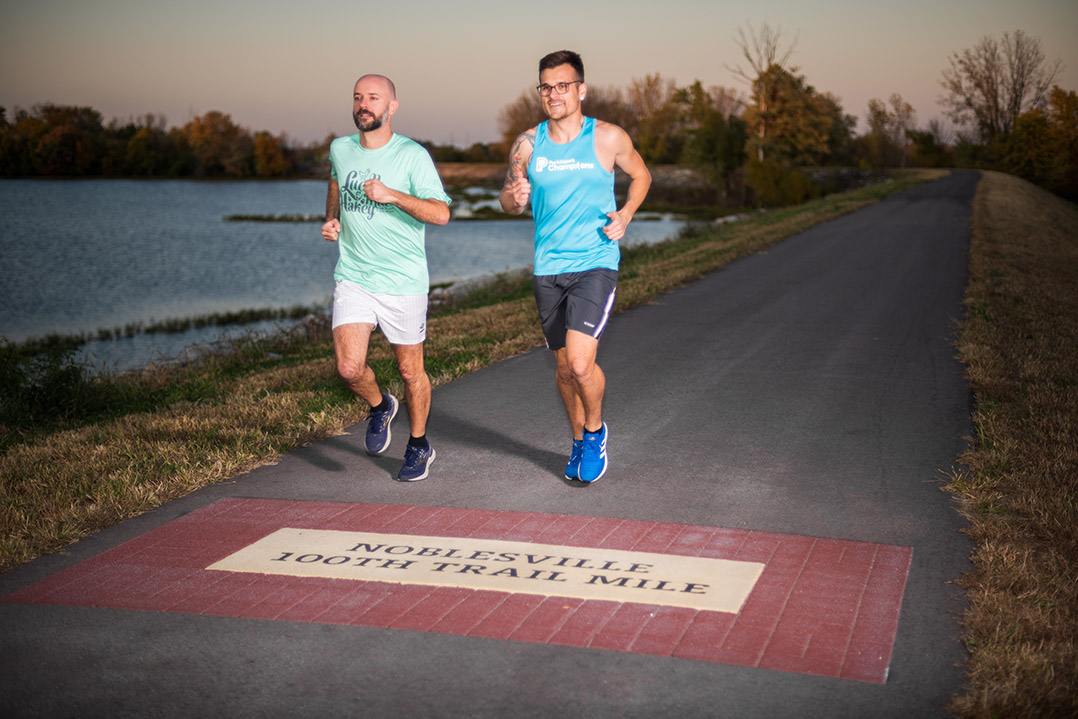 From left, Fort Wayne-based runners Diego Parise and Matt Hakey, founder of Lace Up For Lucy, an initiative to raise money and awareness for Parkinson’s disease, train for their first marathon on the recently completed 100th mile of trail in Noblesville. (Photos by Ben Stout)

For several years, the City of Noblesville has touted its 85-mile trail network, and recent efforts to expand that network has pushed the city forward to a new milestone.

Last month, with the opening of the Levee Trail in the northern part of the city, Noblesville has completed its 100th mile of paved pedestrian path, connecting many of its trails through a partnership with Hamilton County Parks and Recreation and Citizens Energy, which owns the land on which the trail is constructed. 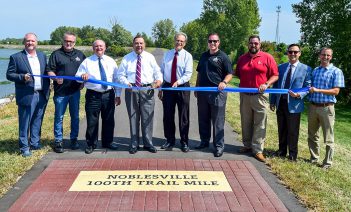 Fifteen years ago, the city had 35 trail miles.

The Levee Trail has added 1.4 miles of multi-use path to the network along the east side of Morse Reservoir from Morse Park and Beach, a county-owned park, to Carrigan Road. The trail also gives the Town of Cicero the opportunity to connect and extend it further north.

“The original thought for the Levee Trail came up in 2013 to provide a connection for the neighborhoods off of and near Carrigan Road and beyond, including Cicero, to give them access to our downtown,” said Andrew Rodewald, a city engineer and project manager for the Levee Trail. “If you ever went on the trail prior to construction, there was a well-worn path from all the foot traffic. That specific area was used a lot by local residents. It’s also just a really scenic area and a beautiful section of trail that we know will be well used.

“It will complete a connection. You can now get from North Harbour subdivision to downtown on a dedicated pedestrian path.”

As part of its agreement with Citizens Energy, the city wants to extend the Levee Trail further north.

“The agreement that we have with Citizens (Energy) says that the city desires to continue this trail north and tie into our northern limit at 216th Street, which ties into a trail that Cicero has that ends there,” Rodewald said. “The ‘how’ of how it gets from here to there is still in the works, so we’re within half a mile of getting to Cicero from Hague Road.”

In addition to the Levee Trail, the city is putting finishing touches on two other major trail projects — the third phase of the Midland Trace Trail on the west side of the city and the fourth phase of the Riverwalk in the southwest quad downtown. Both sections officially opened Oct. 29.

“Some of the connection is trail and some of it is sidewalk, but the (100 miles) is all connected through pedestrian facility,” Communications Manager Robert Herrington said.

“With these new connections, a resident of North Harbour or Oak Bay could actually get to downtown Indianapolis,” Rodewald said. “Take the Levee Trail to Hague Road, then take Hague Road to the Midland Trace, and then take Midland Trace to the Monon. This makes a vital connection for northern Hamilton County.”

Another major pedestrian project in the works in Noblesville is the construction of the Logan Street Pedestrian Bridge, which will make an east-west pedestrian connection from the downtown square across the river.

“We do have three other major trail projects that we have federal funding for that are three to four years out each,” Andrew Rodewald said of projects that are set to begin construction in 2023 and 2024.

Rodewald is a city engineer and project manager for the Levee Trail.

Another project is Stony Creek Trail near Ind. 37.

“That trail will go alongside Stony Creek and will go under Ind. 37,” Rodewald said. “This pops out near Hare Chevrolet and would be the only grade-separated pedestrian crossing in Noblesville. Then, there’s the Allisonville Trail that will put a bridge over Stony Creek and travel from the five-points roundabout (at Greenfield Avenue and Christian and 10th streets) south to Wellington Parkway.”