You are at:Home»Current in Fishers»Fishers Cover Stories»Dedicated vet: Veteran works to honor military service in Fishers

El Ahlwardt inititally planned to pursue a career in business management. But after his  junior year of college, he changed course and joined the U.S. Navy.

His 21-year naval career ended when he retired in 1994 when Fort Harrison in Lawrence was decommissioned. Since that time, he’s dedicated much of his time to honoring military service through City of Fishers ceremonies.

“I got Cs in citizenship in the fourth grade,” Ahlwardt said. “They said, ‘Elmer talks too much in school,’ and then I became a spokesman for the Navy for 17 years.”

Today, Ahlwardt serves as the emcee for all of the city’s military ceremonies, which are held each Memorial Day, National Vietnam War Veterans Day, Korean War Armistice Day, Independence Day and, of course, Veterans Day.

“What I like to do with ceremonies is teach someone something they didn’t know, the differences between Veterans Day, Memorial Day, Armed Forces Day,” he said. “Memorial Day is all about honoring war debt, people who died while they were on active duty. It all started from the Civil War. There were 700,000 people killed, and North or South, it doesn’t matter, people were grieving. So, they decorated graves with flowers. It was a grassroots effort that became a big deal. Veterans Day is something very different. It honors anyone who has served – but not currently, that’s Armed Forces Day.”

During his military career, Ahlwardt and his family were stationed in 13 different places in 21 years before moving to Fishers, where he served as the officer in charge during a joint assignment at the Dept. of Defense Information School at Fort Harrison.

“When I was stationed at Fort Harrison, they said they were going to close the base. I was told I had six months left, and then they were going to move me to Maryland,” he said. “So, that kind of forced our hand to be thinking about my retirement. Our daughter was at Hamilton Southeastern (High School), so we decided instead of moving again that we’d stay put. I’ve driven family down 116th Street for years, and we just had a good feel about it. I don’t know where this connection to this city started, but it’s just a great place to live.”

Ahlwardt, 68, said he doesn’t remember how many years ago he began leading the city’s Memorial Day ceremony but said with the growth of military service recognition programs, he feels compelled to help people understand what military service is about.

“It makes you feel good,” he said. “It’s OK to get mushy about service. It ties the community together.”

Born in Norfolk, Va., Ahlwardt’s father also served in the Navy and his family moved all across the nation before landing in Florida, where he grew up and eventually enlisted on Dec. 22, 1971.

“I was a junior at Florida State (University), went home for Christmas vacation, and I asked my dad if he was busy the next day because I wanted him to swear me into the Navy,” Ahlwardt said. “He had no idea it was coming, and he loved it. I told him, ‘Your whole life has spoken to me about military service.’ So, he swore me in, and when I retired in 1994, he was at my retirement ceremony and participated by wearing his uniform and saluting me. He was a bookend at both ends. He died in January 2002, right after 9/11.

During his time in the Navy, Ahlwardt was a surface warfare officer, specializing in anti-submarine warfare and serving in the Pacific at the naval facility in Pacific Beach, Wash., and served on the frigate, USS Albert David, homeported in San Diego, Calif. He then became a spokesman for the Navy, serving 16 years as a special duty public affairs officer. In that capacity, he served in Yokosuka, Japan, as the assistant PAO for Commander, Naval Forces Japan; PAO for the U.S. Naval Medical Command in San Diego; joint duty within the Public Affairs Directorate at the headquarters of the U.S. European Command in Stuttgart, Germany; PAO aboard the battleship USS Wisconsin, first in Pascagoula, Miss., and then in Norfolk, Va.; PAO for the U.S. Naval War College in Newport, R.I.; followed by serving as the Navy’s officer-in-charge during a joint assignment at the Dept. of Defense Information School at Fort Harrison.

“What we’re trying to do is get the word out so that if you move into town or if you live in town and wonder if you’re invited, you are,” Ahlwardt said. “Come down and honor your dad, uncle or any other family member who served. We’re just trying to honor our veterans. 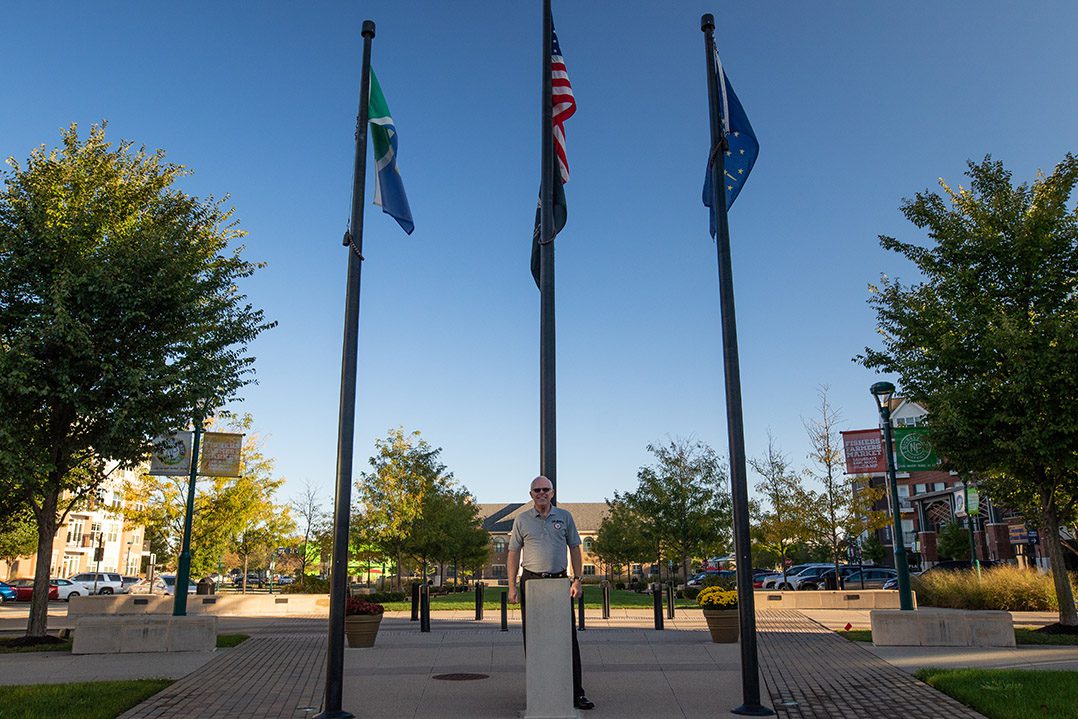 What: The City of Fishers will conduct its annual Veterans Day ceremony with El Ahlwardt as the emcee.

“This is a national holiday, and if you’ve got nothing better to do, you might want to come and participate,” Ahlwardt said. “In addition to honoring veterans, there’s a little bit of education about where Veterans Day comes from. Do you know what happened on Nov. 11, 1918?”

Donuts and coffee will be served to veterans from 8 to 10 a.m., before the start of the ceremony.

Personal: Married to Kathy for 46 years. They met in 1970 as freshman at Florida State University. Together they have two adult children, Heather and Ryan, and five grandkids.

Education: Studied business management at FSU before joining the Navy.

Travel: Has visited approximately 25 nations through military service and through his job with Overseas Council. Travels to Cuba each year for the ministry.

Other hobbies: Golf, ziplining and dancing with his wife