You are at:Home»Current in Westfield»Westfield Cover Stories»Honoring the fallen: Union Street memorial remembers those killed at war

“One day, Don came in and said, ‘What would you think if I put some crosses out in the yard?’” Carol Peed said. “He wanted to go to Iraq. He had retired, but he said just to be there to talk to guys if they need somebody to talk to and (military services) wouldn’t let him go.”

Before retiring, Don Peed — who died in 2005 — was a tank commander in the U.S. Army during the Vietnam War.

“They said no, and he said, ‘I’ve got to do something,’ so that’s when he asked if I thought he could do some little crosses and put them in the yard,” Carol Peed said.

The Peeds’ home is on the west side of North Union Street, but a portion of the front yard isn’t their property. When Don Peed contacted the City of Westfield, officials said the city didn’t own it either. A church that burned down previously occupied the site, so Don Peed approached the Hamilton County Memorial Association and asked permission to place the crosses.

The first cross was in memory of Jeanette Winters, a Marines Corps sergeant who was killed in 2002.

Don Peed joined the then-Westfield VFW branch and several members became involved in building the crosses, which were eventually replaced with limestone bases and plaques.

“He took total care of it until the VFW got involved. After her passed away, the VFW asked if they could keep it going,” Carol Peed said.

When Don Peed, Carol Peed and members of the VFW continued to care for the memorial, now called the Fallen Hoosier Heroes Memorial for Enduring Freedom. Westfield resident and VFW member Dennis Zavata, a Marine veteran, does most of the labor.

“I like to work outside and work construction work, so I started helping to install (the limestone bases) and mowed it (the property). It was one of those need things,” said Zavata, who served in the Marine Corp from 1969 to 1973. “It needed to be done. I do most all the mowing and everything like that. A whole lot of people helped out, even now and over the years. There have been a lot of people that have helped out here in various ways.”

Today, there are 208 Hoosier names represented at the memorial.

“We’ve been very fortunate we haven’t lost very many in a while,” Zavata said.

Zavata and several people keep track of Indiana servicemen and women who are killed in war zones. When a service member falls, a plaque is created with that person’s name, rank and branch and installed on a limestone base, accompanied by the flag of the service member’s branch.

Carol Peed and Zavata often find trinkets visitors leave on the plaques in remembrance, such as pennies or bracelets.

“They’ve left a little bit of everything out there, controllers for video games. We leave them out there until they weather so bad that they don’t look good anymore,” said Zavata, who decorates the memorial with flowers every spring and summer.

Zavata cares for the memorial because he doesn’t want families to think their loved ones have been forgotten.

“I do this because I think myself and quite a few of the people that have been involved or stopped by would like to convey to the loved ones and the family members of the people represented here that obviously we can’t feel exactly like them, but we care and we just want to show to their loved ones we appreciate everything they’ve done and we just care, you know?” he said. “This is a really good memorial because it lets families come here and appreciate the fact that we haven’t forgotten their loved ones.” 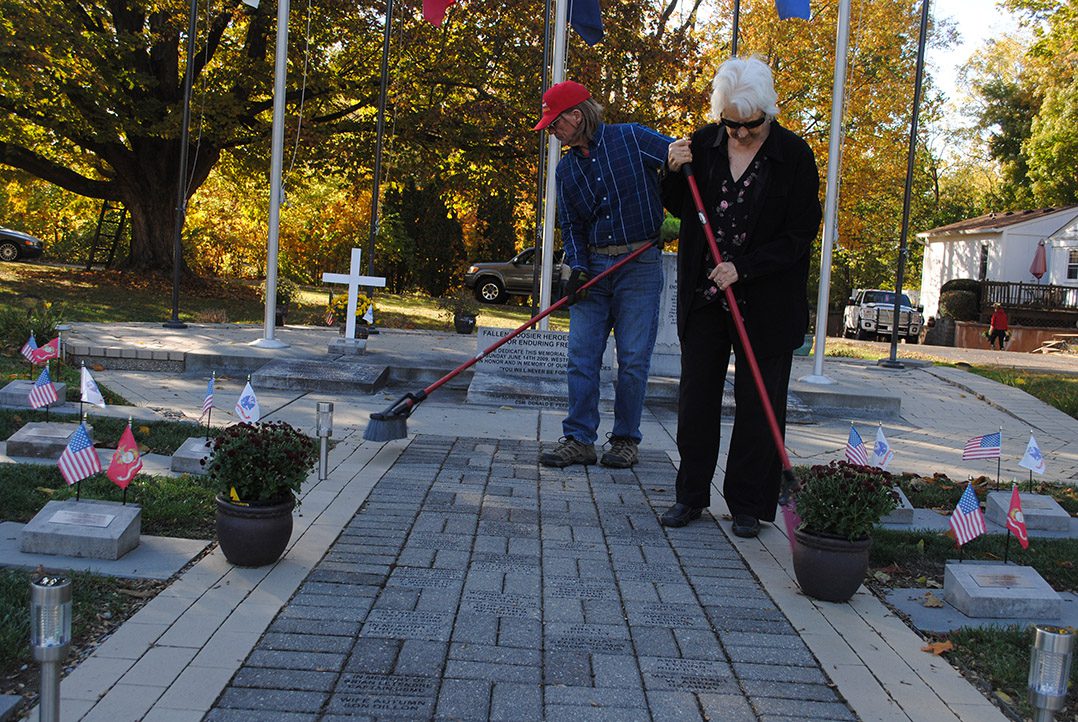 Carol Peed and Dennis Zavata care for the memorial.

Each year, the Fallen Hoosier Heroes Memorial for Enduring Freedom plays host to a Memorial Day service. Organized by the Carmel VFW and the American Legion, the service starts at approximately 9:45 a.m. on Memorial Day.

“We have a bagpiper lady who comes down from Kokomo (that) will bring tears to everyone’s eye when she plays,” said Dennis Zavata, who helps care for the memorial. Two students play “Taps,” and there’s a rifle salute. Wreaths are laid.

“We welcome anybody to come to that service,” Zavata said.