Ben Jones remembers when he first got the idea to make a financial podcast for children.

Jones had a home studio where he would record videos for teaching finance.

“One day I heard (daughter) Makenna reading off of the teleprompter, and I’m hearing this 7-year-old girl and she’s talking about hardcore finance,” the Carmel resident said. “It went off in my head it would be good to start at a younger age to talk to kids about finance.”

So eventually Jones created “Money with Mak & G” featuring his 11-year-old twins, Makenna and Grant. The bite-sized episodes, dubbed “minisodes,” are usually 10 minutes long. They cover different financial topics and break them down into a simple lesson. His goal with the podcast, which started a year ago, is to help families provide financial education to their kids with the mantra of “start young and grow wealthy.”

“Parents are more likely to talk to their kids about S-E-X than they are to talk about money,” Jones said. “We’re trying to get that whole conversation started about money. We’re trying to facilitate that and make it fun.”

Jones said the podcasts are short so they can be listened to on the way to soccer or dance practice.

“When we look at the metrics, anyone that starts to listen to it, they’ll finish it — 95 percent that start it go to the end,” he said. “We just want to help people know more about money.”

There have been 1,300 downloads of the podcasts, and 16 episodes in three seasons. Season 4 will launch Oct. 22 with five episodes. Podcasts are geared to ages 9 to 16.

Jones and his wife, Kristie, and the twins moved to Carmel four months ago from the Chicago suburb of Downers Grove, Ill. Jones left his job with a wealth management company and purchased a couple of businesses in Indianapolis. He owns Stay Dry Roofing and Vanities International with his cousin, John Paul Olinger.

Jones, who grew up in Indianapolis and graduated from Lawrence Central High School, viewed Indiana as a much better place to own a business than Illinois.

“I thought I never would come back to Indianapolis because I lived and worked in over 20 countries,” he said. “I speak French and Spanish. We started looking around and Carmel is rated as one of the great places to live with schools and (low) taxes.”

Jones is a Certified Public Accountant, Certified Financial Planner and Chartered Financial Analyst. He also has an MBA from the University of Chicago.

He had made more than 200 videos for teaching finance, so he had studio room and equipment in his former house in Downers Grove. Since moving to Carmel, they have been doing the podcasts from various studios.

The twins read the scripts – written mostly by Jones – from their iPads. Jones previously wrote content for Wiley Publishing, which produces instructional materials.

“It’s fun because I get to hang out with Grant and my dad, and we have a lot of fun making them,” Makenna said. “I also get to learn about money at the same time. I just love doing it.”

For Grant, the best part is using all the technology.

Grant and Makenna did some acting in Downers Grove. In one play, Makenna played Ariel and Grant played her father, King Triton, in “The Little Mermaid.”

“It was the only sanctioned time he could yell at his sister,” Jones said.

Grant and Makenna, who are sixth-graders at Park Tudor School, are now involved in Young Voices of Indiana.

“From a performance perspective, it’s quite nice because they both get to use their voice from an acting perspective because you just can’t read it,” Jones said. “You have to act it out.”

“If you are just talking plain, no one would be interested,” he said. 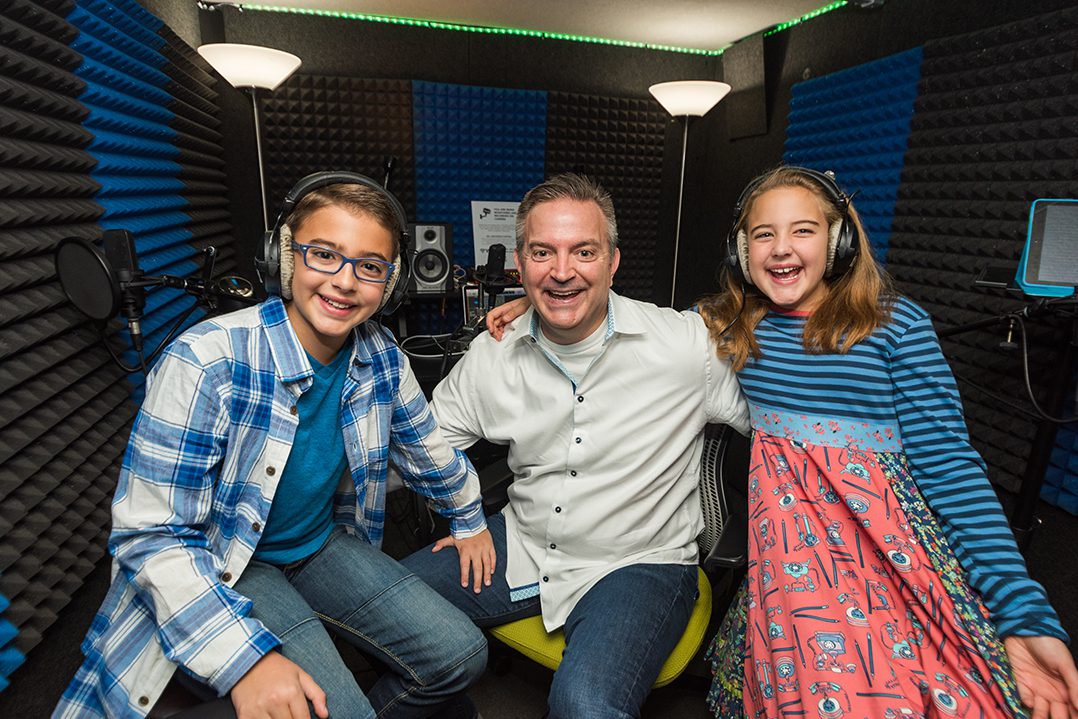 The first season of “Money with Mak and G” included topics on the history of money, how piggybanks were made and allowance.

“The first season was a little bit of a hodgepodge because we were trying to figure it out,” Ben Jones said.

The second season was about saving and starting a small business. They created a hypothetical pet-sitting business.

“The third season is, now that we’re making money, what do we do with it?” Jones said.

“An angel investor helps companies by giving knowledge about how to run a company, and they also invest in the company, so they really want it to go well because they are vining time and money,” Jones said.

Jones said there are a wealth of topics that could be covered.

“I could see a whole season on what certain jobs pay,” he said. “There could be a season on how do you choose a college and what things do you need to think about. There are so many aspects of that.”

Stock Yards Bank serves as a podcast sponsor, along with Mimir and Vision Tech Partners.

Listen to the podcast at https://link.chtbl.com/SqMSulPl

Share. Twitter Facebook Pinterest LinkedIn Tumblr Email
Previous ArticleCarmel major general to retire from Army
Next Article Track to trail: Train tracks on Eighth Street from Division Street to Conner Street will be pulled up, paved this month
Follow us on Social Media