You are at:Home»Current in Carmel»Carmel Community»Carmel major general to retire from Army

Maj. Gen. David Coburn didn’t realize it at first, but the U.S. Army was in his blood.

Coburn didn’t plan to go into the Army, but he changed his mind during college. 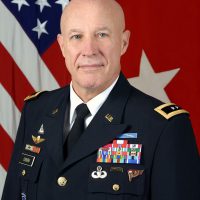 “After 21 years traveling around with my dad, it kind of grows on you,” he said. “It’s been my entire life. All I’ve known is being in the Army.”

Coburn said it’s the people and missions that make serving in the military special.

The Carmel resident will have a retirement ceremony Oct. 25 at the War Memorial. He then goes into transition leave with his official retirement date being Jan. 1, 2020. Coburn, 61, has been in the Army for more than 37 years.

“It’s time to let younger officers come up and take over and push this forward,” he said.

Coburn has been serving as the commanding general of the U.S. Army Financial Management Command in Indianapolis. The change of command will precede the retirement ceremony.

Coburn and his wife, Denise, moved to the Village of WestClay in Carmel in March 2016.

“I’ve been all over the world, all over the United States, but this was the first time in the Midwest,” Coburn said. “The area is incredible. The people are more than nice. It’s been an incredible experience and for a final assignment, it’s been very rewarding.”

As much as they love Carmel, family ties are putting them on the move shortly after the retirement ceremony.

“It’s time to get closer to the kids,” he said.

The couple is moving to Phoenix City, Ala., near Columbus, Ga., where one of their daughters, Erin, lives with her husband, Matt, and 2-year-old son. Another daughter, Dana, lives in Marietta, Ga., with her husband.

Coburn was commissioned a second lieutenant in 1982 in the infantry after graduating from Columbus State University with a bachelor’s degree in accounting. He later obtained a master’s degree in business administration from Syracuse University and a master’s degree in resourcing national strategy from the Industrial College of the Armed Forces. One highlight he said was being the top graduate in his Ranger Class in 1986.

Coburn spent seven years in Italy. He also was stationed in Japan and in the Middle East, including stints in Iraq in 2003 and 2008.