The home of Michael and Lisa Sandy at 485 W. Pine St. in Zionsville has been designated as the first SullivanMunce Cultural Center Century Structure.

The program honors Zionsville’s architecturally significant and historic residential and commercial structures that are at least 100 years old. 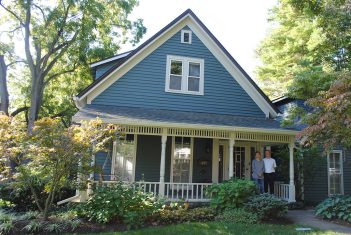 Michael and Lisa Sandy moved into their home in 1988. It was built in 1865 and was recently designated a Century Structure. (Photos by Anna Skinner)

The Century Structure program was established in 1987 by the Zionsville Historical Society, and the SullivanMunce Cultural Center took control of the initiative last year. Prior to SullivanMunce gaining control of the program, the Zionsville Historical Society recognized 21 homes with the designation.
The Sandys are no novices to living in a home more than 100 years old, though.

“We’ve lived in Zionsville since 1978, and we knew this home was very old, but we didn’t know how old it was,” Michael Sandy said. “We knew we lived in a really old part of Zionsville and knew this house had an interesting history.”

The Sandys purchased home at 485 W. Pine St. in 1988. They learned about some of its more interesting historical stories on an annual ghost walk one year.

“They talked about a shooting that took place in the backyard,” Michael Sandy said. “Someone tried to break in this house and the gentleman who lived here was a very prominent citizen, and he woke up and heard some commotion. So, he got his shotgun and chased the would-be burglars back out the window. It was nighttime, so he shot in the dark and went to bed.

“He got up next morning to a body in the backyard. To me, the most interesting part is the other two guys came back and rifled his pockets and left.”

The original home was three rooms downstairs and two rooms upstairs. Now, there’s an extra bedroom and several other rooms added, making it nearly double the original size. The porch, windows, plaster and floors all are original. 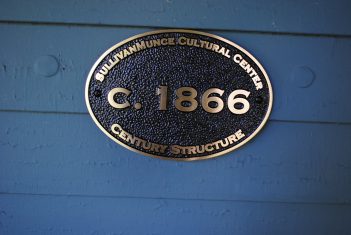 The home at 485 W. Pine St. was the first Century Structure recipient since the SullivanMunce Cultural Center took over the program.

Century Structure committee chair Ralph Stacy said the exterior of the home is mostly what the committee considers when deciding to award the designation.

“The Century Structure program is mainly interested in the front of the home or the exterior, and what is so wonderfully portrayed in this home is (its history) not only outside but inside,” Stacy said. “One of the problems we are having is you get people who want to gut out an old home and make it an ‘open concept,’ but plank floors and the original structure are irreplaceable and precious.”

Michael Sandy said one of the main guidelines for the Century Structure program is if the original owner of the home would be able to stand on the sidewalk and recognize the structure of the home. He said the home at 485 W. Pine St. looks nearly identical to when it was built circa 1865.

Executive Director Cynthia Young said SullivanMunce hoped to take control of the Century Structure program because it aligned with the center’s values.

“It goes along with our mission to preserve Zionsville’s history, so we felt, and the Zionsville Historical Society too felt, it was a good fit for our mission,” Young said.
In the future, as the program develops, Young said home tours of the Century Structures may be offered.