The Metropolitan School District of Lawrence Township has tried its hardest to meet each students’ needs, such as clothes or food, and a new partnership is strengthening that effort.

Tracy Beer, a family liaison for Lawrence Township, first heard of the Purposity mobile application while at a conference. Purposity, a word created from the combination of purpose and generosity, provides a platform for school districts and nonprofits to post student or local needs, and it gives the community a way to provide those needs.

“Purposity is an app that was designed to fill the needs of families or students,” Beer said. “I was very intrigued, so I came back and talked to (Director of Student Services) Shawn (Bush) last October. I told her about it.”

Purposity is free for school districts to use. After MSDLT Supt. Shawn Smith agreed to the app, Beer and Bush began collaborating with Purposity.

In mid-July, Purposity informed MSDLT that it needed 300 followers of the application to be able to go live.

“We ended up at about 225 I think, and I reached out to Purposity,” Beer said. “I could see our numbers drop some and add some, so I reached out and said, ‘Hey, this is what we are seeing,’ and they went ahead and launched us early so we wouldn’t lose any (more users).”

The app went live for MSDLT at the end of September. To kick it off, Beer posted three needs from students, which were filled within 24 hours.

“I posted about 10 more a few days later, and all of those needs were met; we had all the items here within the building within a week of posting those original needs,” Beer said.

When posting a need, Purposity allows the district to select a first and second choice item from Amazon to fill that need.

“It’s such a win-win, because we do have very specific needs that come up from time to time,” Bush said. “For example, sometimes we have young ladies who are pregnant and need maternity clothes. We had a young man who was very large for his age and needed a 4-XL, and we didn’t have any 4-XLs. We had a family who had a kitchen fire and they needed pots and pans and kitchen utensils. So, with something like this, we can be really specific about needs so we aren’t pulling our resources and running out to Walmart really quick to try and get something.

“This is just, it’s a way for the community to assist students and families, and that it makes it so much easier for us. It’s so convenient and so timely, I’m really excited. We are trying to get more needs posted.”

The district may have some supplies on hand, such as school supplies or backpacks, but there are other items people don’t think of when donating to schools.

“We go through coats like crazy in the winter, so a lot of times we run out of certain sizes,” Beer said.

Purposity is free for Apple and Android users. For more, visit purposity.com. 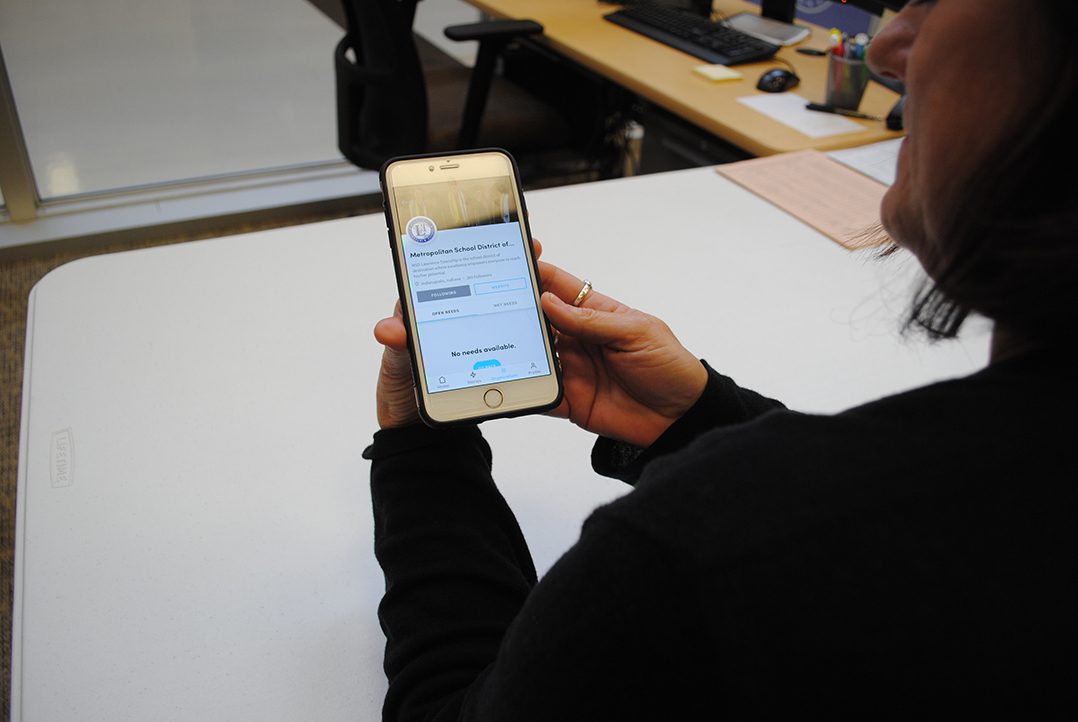 The Purposity app is completely anonymous, in which the donors aren’t aware of the recipients’ names, and the recipients don’t know who provided the donations.

When a need is met, it ships from Amazon to the MSDLT district building on Sunnyside Road.

Donors aren’t informed which school the student in need attends, but they do receive some information, such as age and gender, to help shop for certain items.

“They don’t know race, name, school,” said Tracy Beer, family liaison for Lawrence Township. “The other cool thing the app does is it allows us to send thank you notes once we receive the item. We can take a picture of it, the example they gave at conference was the item was a new pair of shoes and the picture showed the student’s feet with the new shoes on (but not the student).”