You are at:Home»Current in Fishers»Fishers Community»HSE student aids the Julian Center by designing awareness buttons

When a friend reached out to Hayden Sisemore about a potential graphic design volunteer opportunity, he saw it as a chance to help a good cause and took on the project.

The project involved designing buttons to raise awareness for recent research that correlates real or perceived pet abuse and intimate partner violence. The research was conducted out of Indiana University. 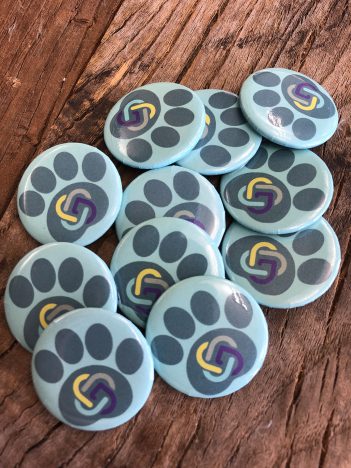 “I love graphic design, so I thought it was nice to mix a kind deed with something I love,” said Sisemore, who designed the buttons for free for the Julian Center, an Indianapolis-based nonprofit that helps and empowers victims of domestic violence, sexual assault and other life crises.

“Pets can be both a lifeline for people who are involved in violent relationships, and they also are too often used as tools and weapons as a way for abusers to control victims in violent relationships,” Julian Center President/CEO Catherine O’Connor said. “The buttons evolved as a way to (raise awareness) of the issue and concern about this problem and get people to understand.”

O’Connor the Julian Center receives at least two or three calls a week from victims who are concerned about a pet.

“We thought it was a great way to engage young people,” O’Connor said about using Sisemore’s services. “Young people are so fabulous in so many ways. They really have a special way of articulating an issue and bringing in a new perspective.”

Sisemore, a junior at Hamilton Southeastern High School, said although he doesn’t plan on pursuing graphic design as a career, he is open to offering his services again to a charity.