Senior Allie Crawford has had an active role in the Carmel High School music and theater worlds. 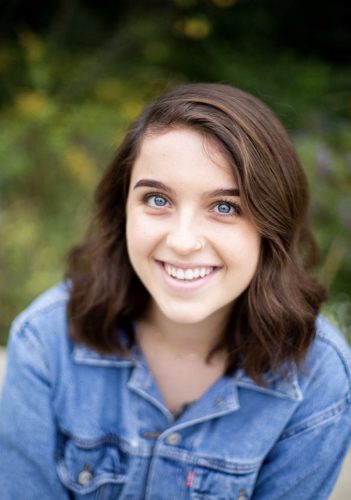 “It’s a big responsibility,” Crawford said. “I’m excited to be doing it. It’s a unique show and unique role. The storyline is she has superpowers, so it’s very interesting to try to portray with the restraints that happen in live theater. It’s tough to portray flight by remaining on the ground.”

Since the play is not well known, the actors can give their own interpretation.

There is no singing but there is dancing.

“We’ve all been challenged by the dance elements of the show,” said Crawford, a member of Accents, the all-female show choir.

Director Maggie Cassidy’s friend saw it in Chicago and suggested it would be a good play for high school students to do.

“I read the script and it seemed like my kind of show,” Cassidy said. “It has some cool movement in it, symbolism. It’s a pretty bare stage and everything is created by lighting effects.”

This is the first time Cassidy has directed a play in the smaller Studio Theater.

“I feel I could do a play a little more unique, maybe one people hadn’t heard of before since I didn’t have to fill a big theater,” Cassidy said.

“She starts out super nice and wants to make Emily feel like she belongs at the school,” MacNulty said. “Once Emily gets attention, she gets jealous and turns on Emily. She becomes an antagonist. It’s different from any role I’ve played in the past, so it’s definitely a challenge. I think it’s going to be fun.”

Senior Austin Roberts, who acts and plays the saxophone in the band, portrays teacher Dan Christoper.

“It’s definitely the biggest role I’ve had at Carmel,” Roberts said. “It’s a movement-based piece and I have no dancing experience. It’s interesting to learn that on the fly.”