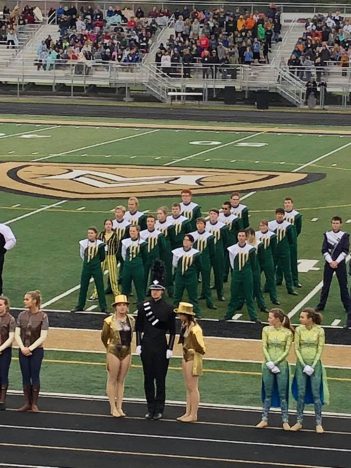 The band performed a show called “Travelogue.” Band director Mark Sands said the show represented a traveling tourist and began with the band performing “An American in Paris” by George Gershwin, followed by Toto’s “Africa” and “New York, New York” by Frank Sinatra.

“We started out in Paris and we’d do choreography and then flew to Africa and shifted gears and did Toto’s ‘Africa’ and did some body work and choreography emulating African dance, and then we wound up in New York City for the big finale and did Frank Sinatra’s ‘New York, New York,” Sands said.

Originally, the state finals were scheduled for Oct. 20, but a wind storm postponed the competition. The Indiana State School Music Association instituted a one-week delay, and Sands said the band was able to practice the routine for one more week before performing at Mt. Vernon High School.

Although this year was the highest the band has placed at state, Sands said it’s not about the placement.

“It’s about how the kids perform-show musically and have a lot of fun and learn to interact and to work together,” he said.

Students have practiced the performance since June. Sands said planning for the 2019 performance will begin in December.